How the Offense Scores in a Football Game

When the offense in an American football game can move the ball downfield toward the end zone, it can score. These offensive plays can score a touchdown or two-point conversion.

Making the best run play on the goal line

The “dodger and dancer” type of runner who can break out in the open field isn’t as valuable near the goal line as the “pour it in there guy.” Down on the 1-yard line, you need a powerful runner — a tough, physical player — who can bowl over people. Because he’s going to be hit, he needs to be able to bounce off one or two tacklers. The best play at the goal line is always something straight ahead.

Scoring inside the opponent’s 10-yard line

One pass in today’s NFL offenses is perfectly suited to the part of the field inside the 10-yard line: the quick out. As shown in this figure, the outside receiver (WR on the left) runs straight for 5 to 7 yards, and then breaks quickly to the outside. Offenses use this pass play a lot. 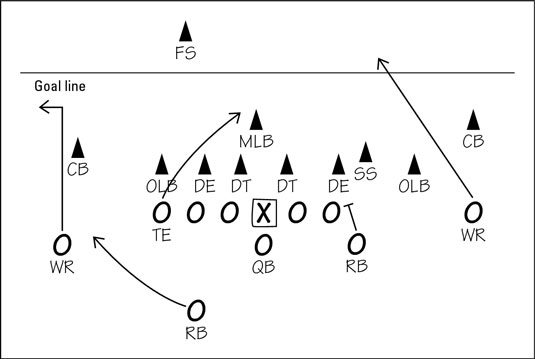 If you have a big, physical receiver, the quick out is the ideal pass. The receiver and the quarterback have to be in unison and time it right. If the quarterback completes the pass, the receiver has a chance to break a tackle and run in for a touchdown.

Of course, the quick out is also a dangerous pass to throw. If the cornerback reads the play quickly and the quarterback fails to throw hard and accurately, the ball is likely to be intercepted by the defensive player and returned for a touchdown.

Kicking a field goal or going for a two-point conversion

After scoring a touchdown, a team has two options:

For a two-point conversion in the NFL, the ball is placed on the 2-yard line, the same spot as for a kick. (College and high school teams must score from the 3-yard line.)

Coaches have a universal chart that tells them when to kick and when to attempt a two-point conversion:

The two-point conversion, with the right multiples of field goals and touchdowns, can close a deficit or widen it, depending on the situation. It’s a gamble. But when a team is trailing, it may be the quickest way to rally and possibly force overtime.

This example play for a two-point conversion was designed to succeed against a zone defense. The offense lines up three receivers to one side:

The quarterback wants different receivers to come open, depending on the defense:

If the defense reads the play perfectly, the quarterback is in trouble because he must find a secondary target while under a heavy pass-rush. Still, this pass is almost impossible to defend because the offense is prepared for every defensive concept.