How an Offense Can Beat a Defense in American Football

One of the primary factors that helps a football coach decide what offense to run and what plays to call is how the defense sets up. Various defenses call for different strategies to beat them. 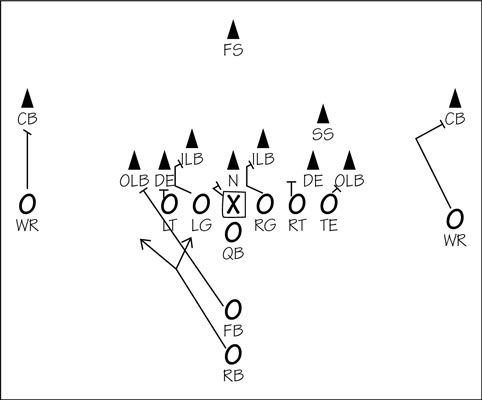 When facing a 3-4 front (three down linemen and four linebackers), the offense’s best strategy is to run weak side, or away from the tight end (which is always the strong side of any offensive formation).

One possible running play is called the weak-side lead. With this play, the defensive end (DE) usually attempts to control and push the offensive tackle (LT) inside toward the center of the line, leaving the linebacker behind him (OLB) to defend a lot of open area. The offense is in the I formation, and the fullback (FB) runs to the weak side and blocks the linebacker, shoving him inside. The left offensive tackle allows the defensive end to push him a little, letting the defender believe that he’s controlling the play. However, the offensive lineman then grabs the defender, containing him, and moves him out of the way to the right. The ball carrier should have a clear running lane after he hits the line of scrimmage. The preceding figure diagrams the play.

Running against a 4-3 front. 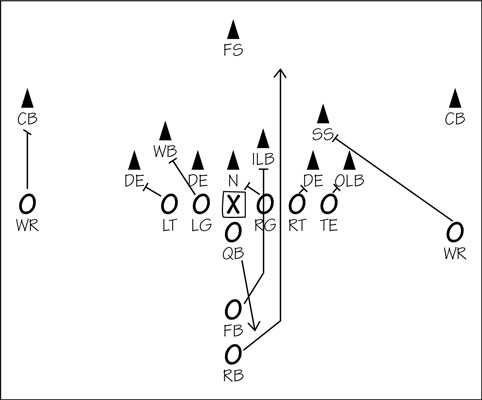 An offense can attack a 4-3 front (four down linemen, three linebackers) in many different ways, but one common strategy is to attack what coaches call the bubble side (the defensive side where the two linebackers are positioned).

This play is called a delay draw to the strong side (the tight end side) of the offensive formation. The right guard (RG) blocks down on the defensive nose tackle (N), and the fullback (FB) runs into the hole and blocks the front-side linebacker (ILB). The right tackle (RT) blocks the defensive end (DE), keeping him out of the middle, and the tight end (TE) blocks and contains the outside linebacker (OLB). When the ball carrier reaches the line of scrimmage, he should find open space between the offense’s right guard and right tackle. 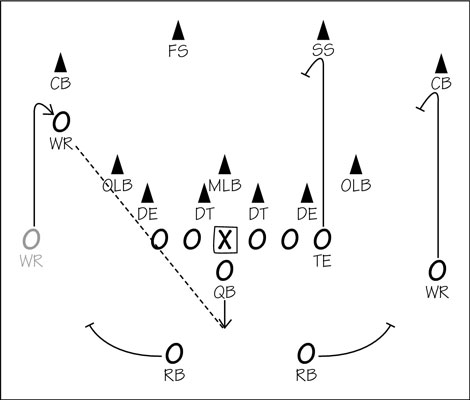 In the four-across defense, the defense plays all four secondary players deep, about 12 yards off the line of scrimmage. To beat this defense, the offense wants to have two wide receivers (WR) run comeback routes, have the tight end (TE) run a 16-yard in route, and have the two backs (RB) swing out to the right and left. The running back to the quarterback’s left side should run more of a looping pass pattern. The quarterback (QB) throws the ball to the wide receiver on the left.

Press coverage is when the defensive team has its two cornerbacks on the line of scrimmage, covering the outside receivers man-to-man. One tactic against this defense is to throw to the tight end (TE), who runs to the middle of the field, as shown on the left.

Another option is to throw to the running back (RB), who’s swinging out to the left. The wide receivers (WR), who are being pressed, run in the opposite direction, away from the area in which either the tight end or the running back is headed, as shown on the right.

Passing against a zone coverage. 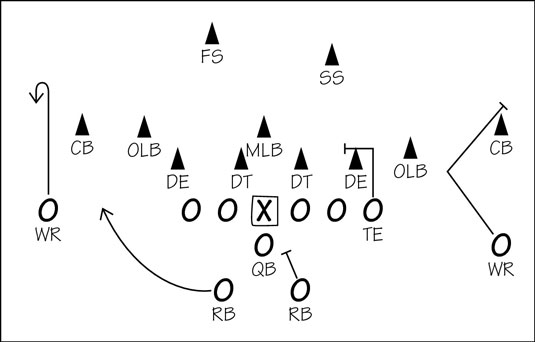 When a defensive secondary is playing zone — meaning the cornerbacks are playing off the line of scrimmage — they aren’t in press coverage. The best pass against a zone coverage is the curl, and the best time to use it is on first-and-10. A receiver (WR) runs 10 to 12 yards and simply curls, or hooks back, toward the quarterback (QB). He usually curls to his left and attempts to run his route deep enough to gain a first down.

Selecting an offense versus a zone blitz. 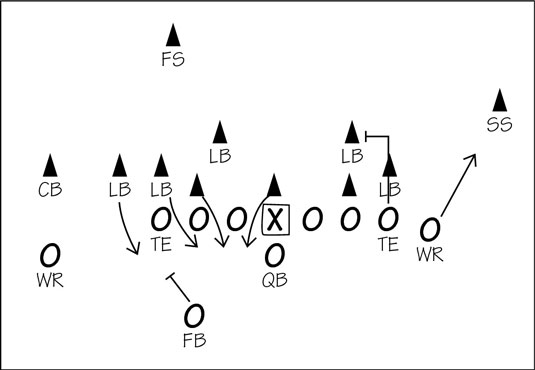 When facing a defense that blitzes a lot off the corner (linebackers or safeties coming from either wide side of the line of scrimmage against your offensive tackles), the offense should align with two tight ends in order to help pass-protect. To beat a zone blitz with a passing attack, the offense must find its opponent’s weakest defender in the passing game (be that cornerback, safety, or linebacker).