By the design of the American football defense, linebackers are the leaders of that 11-man squad. The rest of a team’s defense looks to the linebackers in a number of ways:

Although a linebacker’s main intention is to tackle the offensive player with the ball, the term linebacker has become one of the most complicated terms in football. Linebackers have become football hybrids due to their wide variety of responsibilities and enormous talent.

The job description of all linebackers is pretty lengthy:

To fully understand linebacker play, you need to be aware that every linebacker wants to coordinate his responsibilities with those of the defensive line. A linebacker is responsible for at least one of the gaps — the open spaces or areas between the offensive linemen — in addition to being asked to ultimately make the tackle.

To keep your sanity when watching a game, just try to remember which players are the linebackers and that the bulk of their job is to do what Patrick Willis of the San Francisco 49ers (shown in this figure) does: make tackles from sideline to sideline and constantly pursue the ball carrier. 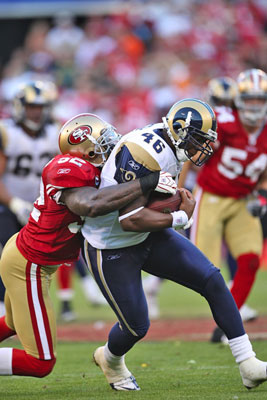 Linebackers must take full advantage of what they can see, feel, and do. Every drill they do in practice, which carries over to the game, is based on these things: