How to Straighten Crooked and Distorted Photos with the Nikon D7500 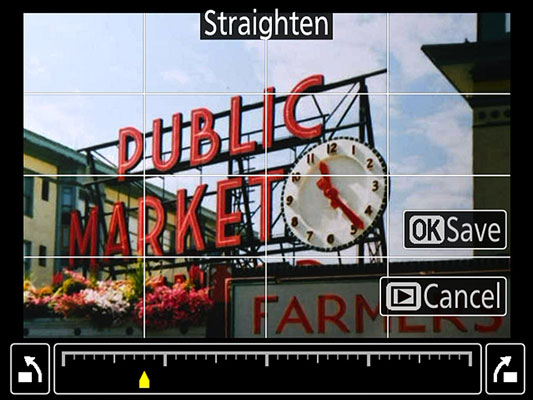 The Straighten tool offers a quick and easy way to fix a tilted horizon line.

The photographer used the tool to produce the right image in the following figure.

After you select the tool, you see a grid over your photo and a horizontal and vertical scale at the bottom and left edges of the screen. Drag left or right on the bottom scale (or press the Multi Selector left and right) to move the out-of-whack structure horizontally. Drag up and down on the vertical scale or press the Multi Selector up and down to rotate the object toward or away from you.

One important detail about these tools: In order for the camera to perform this magic, it actually distorts the original, tugging the corners this way and that to get things in proper alignment. This distortion produces an irregularly shaped image, which then must be cropped and enlarged or reduced to create a copy that has the same pixel dimensions as the original. That's why the After photo contains slightly less subject matter than the original. (The same cropping occurs if you make these changes in a photo editor.) Framing your originals a little loosely ensures that you don't lose important parts of the image due to the adjustment.