Preparing the Canon EOS Rebel T7i/800D Camera for Initial Use

Explore Book Buy On Amazon
After unpacking your Canon EOS Rebel T7i/800D camera, you have to assemble a few parts. In addition to the camera body and the supplied battery (charge it before the first use), you need a lens and a memory card. With camera, lens, battery, and card within reach, take these steps:

Turn the camera off. Attach a lens. 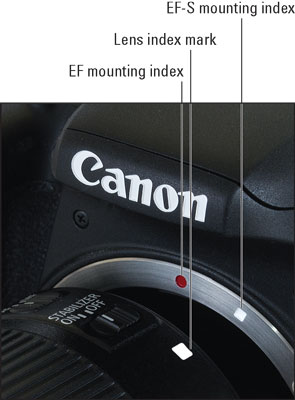 First, remove the caps that cover the front of the camera and the back of the lens. Then locate the proper mounting index, which is a mark on the camera’s lens mount that indicates how to align the lens with the camera body. Your camera has two of these markers, one red and one white, as shown. Which marker you use depends on the lens type:

Install the battery and insert a memory card. 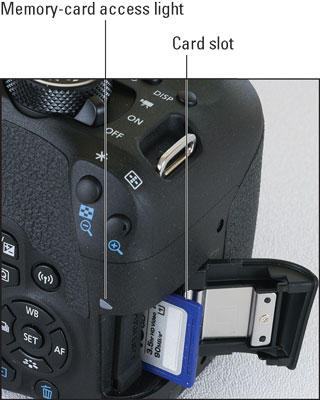 The battery compartment is on the bottom of the camera. When inserting the battery, hold it with the contacts down and the Canon imprint facing the right side of the camera grip. Gently push the battery in until the gray lock clicks into place.

Open the memory card door and orient the card so that the label faces the back of the camera, as shown. (If you look closely at the silver panel on the inside of the card door, you see a diagram that indicates the proper card orientation.) Push the card gently into the slot and close the card door.

The memory-card access light, labeled here, blinks for few seconds to let you know that the camera recognizes the card. (The light appears even when the camera is turned off.)

Rotate the monitor to the desired viewing position.

Move the On/Off switch to the On position. 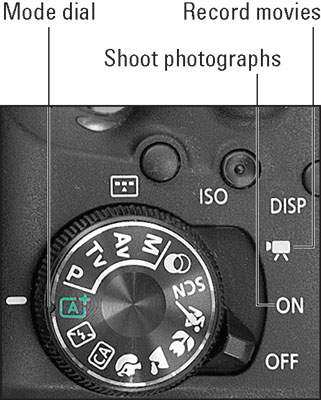 Okay, that’s an odd way to say “turn on the camera,” right? Agreed, but there’s good reason for it: This particular On/Off switch has three positions. When you rotate the switch to On, the camera comes to life and is ready to take still photos. If you move the switch one step further, to the movie camera symbol, the camera turns on and sets itself to Movie mode. You can’t take a still photograph in Movie mode; it’s good only for recording video.

It’s easy to accidentally move the On/Off switch all the way to the Movie mode setting when you really want to take regular photos, so pay attention when turning the camera on until you get used to this arrangement. (One clue that you’ve rotated the switch too far is that the camera automatically engages Live View, which disables the viewfinder and presents a live preview of your subject on the camera monitor.)

Set the language, time zone, and date. Adjust the viewfinder to your eyesight. 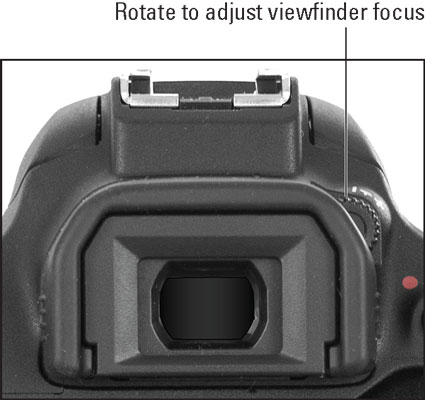 The date/time information is included as metadata (hidden data) in the picture file. You can view metadata in some playback display modes and in certain photo programs, including Canon Digital Photo Professional.

When you power up the camera for the first time, the monitor displays a screen asking you to set the date, time, and time zone. The easiest way to adjust these settings is to use the touchscreen, which is enabled by default. Just tap an option to select it and then tap the up/down arrows at the bottom of the screen to set the value for that option. Finally, tap OK to exit the screen.

You also can adjust settings by using the Set button and the four cross keys surrounding it. (These controls live just to the right of the monitor.) Press the left/right keys to highlight a setting, press Set to activate the option, press the up/down keys to change the value, and press Set again to finalize the change.

You control viewfinder focus through the dial labeled. (In official lingo, it’s called the diopter adjustment dial.) After taking off the lens cap, follow these steps: