Explore Book Buy On Amazon
With your Rebel T6/1300D in the P, S, and A exposure modes, you have some input over exposure. In P mode, you can rotate the Main dial to choose from different combinations of aperture and shutter speed; in Tv mode, you can dial in the shutter speed; and in Av mode, you can select the aperture setting. But because these are semiautomatic modes, the camera ultimately controls the final exposure.

If your picture turns out too bright or too dark in P mode, you can't simply choose a different f-stop/shutter speed combo because they all deliver the same exposure — which is to say, the exposure that the camera has in mind. And changing the shutter speed in Tv mode or adjusting the f-stop in Av mode won't help either because as soon as you change the setting that you're controlling, the camera automatically adjusts the other setting to produce the same exposure it initially delivered.

Not to worry: You actually do have final say over exposure in these exposure modes. The secret is Exposure Compensation, a feature that tells the camera to produce a brighter or darker exposure on your next shot, whether or not you change the aperture or shutter speed (or both, in P mode).

Best of all, this feature is probably one of the easiest on the camera to understand. Here’s all there is to it:

Each full number on the EV scale represents an exposure shift of one full stop. In plain English, it means that if you change the Exposure Compensation setting from EV 0.0 to EV –1.0, the camera adjusts either the aperture or the shutter speed to allow half as much light into the camera as it would get at the current setting. If you instead raise the value to EV +1.0, the settings are adjusted to double the light.

Exposure compensation is especially helpful when your subject is much lighter or darker than an average scene. For example, take a look at the image on the left. Because of the very bright sky, the camera chose an exposure that made the tree too dark. Setting the Exposure Compensation value to EV +1.0 resulted in a brighter image, allowing the details of the tree to be more visible. 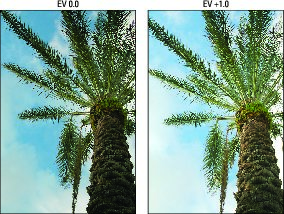 For a brighter exposure than the autoexposure mechanism chooses, dial in a positive Exposure Compensation value.

You can take several roads to applying exposure compensation:

In the P, Tv, and Av exposure modes, the meter indicates the amount of Exposure Compensation adjustment.

Note that even though the meters initially show a range of just +/– three stops, you can access the entire five-stop range. Just keep rotating the Main dial to display the far ends of the range.

When you dial in an adjustment of greater than three stops, the notch under the viewfinder meter disappears and is replaced by a little triangle at one end of the meter — at the right end for a positive Exposure Compensation value and at the left for a negative value. However, the meter on the Shooting Settings and Live View screens and on Shooting Menu 2 adjust to show the proper setting.

Whatever setting you select, the way that the camera arrives at the brighter or darker image you request depends on the exposure mode: These explanations assume that you have a specific ISO setting selected rather than Auto ISO. If you do use Auto ISO, the camera may adjust that value instead.

A final, and critical, point about exposure compensation: When you power off the camera, it doesn't return you to a neutral setting (EV 0.0). The setting you last used remains in force for the P, Tv, and Av modes until you change it. So it's always a good idea to zero out the setting at the end of a shoot.