External Features on the Left Side of the Rebel T6i/750D 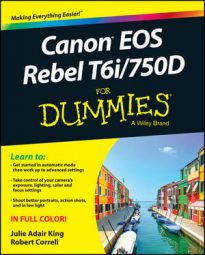 Hidden under two covers on the left side of the Rebel T6i/750D camera, you find inputs for connecting the camera to various devices. The figure shows you what lurks beneath both covers (they've been digitally removed to make it easier for you to see the interesting bits underneath). Starting with the left side, the available connections are 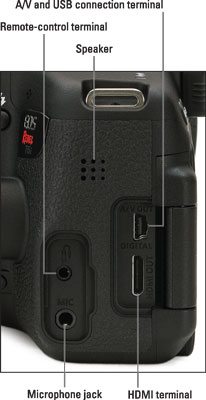 Inputs for connecting the camera to other devices are hidden by rubber covers (not shown in the figure) on the left side of the camera.

If you turn the camera over, you find a tripod socket, which enables you to mount the camera on a tripod that uses a 1/4‐inch screw, plus the chamber that holds the battery. Also found in the chamber is a connection for attaching the optional Canon AC power adapter kit ACK‐E10, which you can find for about $65. See the camera manual for specifics on running the camera on AC power.