Explore Book Buy On Amazon
As if your photographic life weren't complicated enough, Canon recently added a wrinkle to its automatic white-balancing system. On the Rebel T6, you can set the Auto option to perform in one of two ways; the difference matters only when you shoot in incandescent lighting or other types of light that have a similar Kelvin temperature (color cast). The two settings are Ambience Priority Auto and White Priority Auto. They work as follows:

If you use flash, though, the White Priority deal is off. Even if the Auto option is set to White Priority, the camera uses the same color-compensating formula as it does in Ambience Priority mode. Oh, and just to confuse matters more, the settings displays still indicate that White Priority is in effect.

The good news is that in most cases, the Auto setting you select won't make a whit of difference. Again, it only tweaks colors if you're shooting in incandescent lighting. Even then, how much your picture is affected depends on your subject, the intensity of the incandescent light, and whether any other lights that have different color temperatures are also hitting the subject.

In this image, the orchid was lit only by incandescent light, so the Ambience Priority example (left image) does have warmer colors than the White Priority example (right image). Yellow parts of the petals became more so, and the white and red areas take on a slight golden cast as well. But sometimes, it's difficult to detect any difference between the results of the two settings. 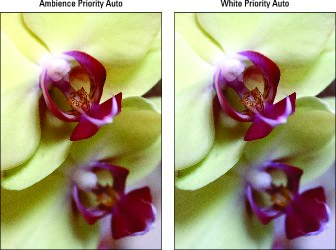 To specify which priority you want the Auto setting to use, first select Auto from the White Balance setting screen, as shown on the left below. You can get to this screen by pressing the WB button (viewfinder shooting only) or by displaying the Quick Control screen, highlighting Auto, and pressing the Set button. Then press the DISP button to bring up the screen shown on the right.

Notice the label at the bottom of the left screen; it reminds you to use the DISP button to access the AWB adjustment screen. After you get to the adjustment screen, called Detail Settings (huh?), highlight your choice and press Set. You're returned to the main settings screen; press Set again to exit to the Quick Control screen. To return to shooting, press the shutter button halfway and release it.

With the Auto setting selected, press the DISP button to access the control for setting the Auto mode to White Priority or Ambience Priority.