How to Machine-Milk a Goat

Raising goats for milk is part of a green lifestyle. If you don't think your hands are strong enough to hand-milk your goats, you have a problem such as carpal tunnel, or milking your goats by hand just takes too long, consider getting a milking machine. Small-scale dairy goat farms use a bucket milk machine rather than one with a direct line into a bulk milk tank. 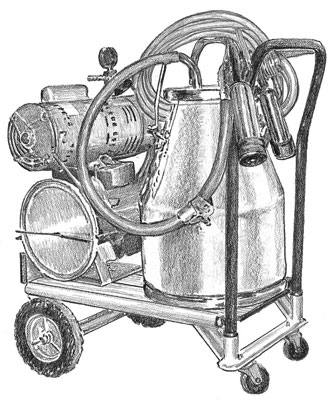 A bucket milking machine works well if you don't have a large number of goats to milk.

A milking machine is a combination of several components that work together to create a vacuum that draws milk from the teats, alternating with air, which causes the milk to flow into a container in a rhythmic fashion, similar to a kid nursing.

New ones are pretty expensive, but you can sometimes find a used one online for a reasonable price.

Like any skill, machine-milking takes practice. Try to find other goat owners who machine-milk so you can get an idea of what to expect from a milk machine and what using one entails.

Here are the steps for milking a goat with a milking machine: