Explore Book Buy On Amazon
The average length of time that a person owns goats is only around five years. One reason is that they have unrealistic expectations of what owning goats requires. So what exactly do you need to understand before becoming a goat owner, and what are some of the common missteps you can avoid? 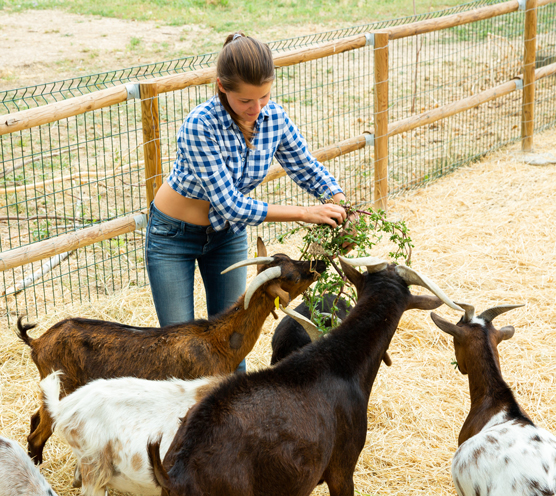 Getting too many goats too fast

Quite often people decide to get into goats and then go out and start buying goats from various farms that are reputed for their quality. What they fail to consider is that the goats may not just double in number during the first kidding season—they may triple or quadruple if the goats are fertile! And these new little goats will grow—leading to cramped quarters, more likelihood of disease due to crowding, and more money coming out of your pockets for food and equipment.

I started reasonably with two doe kids, planning to breed them that fall and milk them in the spring when they kidded. I didn’t realize how cute their kids would be and what a hard time I would have giving them up. Each doe had a buckling and a doeling that next spring and I just had to keep one of each. Within three months I needed a separate space for my buck, which meant getting another buck or a wether. This continued for a number of years (think rabbits) until I finally came to my senses and reversed the trend.

So, I am speaking from experience when I say: Start slow and don’t get the maximum number of goats that your farm can handle right away. And then think about what you are doing when you start breeding your goats. They grow exponentially, and all of the kids are way too cute!

Failing to educate yourself before getting goats

I don’t know how many times I’ve heard, “I want to get a couple of goats to control the blackberries on my property.” When I ask about fencing, where the goats will sleep, or how the potential owners will protect their goats from the things they don’t want the goats to eat, they seem puzzled. They hadn’t thought about that; in fact, they didn’t even know that these could be problems.

Raising goats is a big responsibility. You have these animals’ lives in your hands and need to take that seriously. You can’t just put them out in a field and expect them to do well. They need to have their hooves trimmed; to be monitored for parasites; to be given a safe shelter, clean water, appropriate food, and so on. They require time, money, care, and knowledge to thrive and survive.

Not educating yourself about goats and goat ownership is a guarantee for a short-lived goat experience, a lot of grief, or a much more expensive undertaking than you had planned.

Whether you just want to raise a couple of goats for milk or pets, or a herd of meat goats, don’t make the mistake of underestimating the setup and ongoing costs. I’ve had to add new fencing to my property and replace fencing that had worn out a lot more often than I had anticipated. And who realized that those plastic water buckets actually break after a few years? Or that rats can chew through plastic garbage cans?

One stanchion might work for the two dairy goats you have in the beginning, but down the road you find that you need one or two more. And routine medications actually expire after a year or two and have to be replaced even though you haven’t used them.

Raising goats reminds me of what my grandpa used to say: “If I had a million dollars, I would go back into farming until the money ran out.”

Failing to provide for the goats, in the beginning or along the way, will cost more in the long run — whether it be vet bills, losses to predators, the annoyance of goat escapes, or even your back when you have difficulty controlling the goats to do routine care.

Paying too much or too little for your goats

Not all offspring from prize-winning, high-milking, well-muscled, or perfectly conformed goats will be champions, good producers, or even acceptable for anything other than pets.

Buying goats from a breeder who has a good website and sells a lot of goats or one whose goat won a junior championship doesn’t guarantee that what they sell you will be the best. Find out the going rate for the type of goat you want, comparison shop, and if you can, ask other buyers about their experiences buying from the seller.

Besides figuring out what the goats are worth to you, consider whether the high-priced goats will better meet your needs or pay for themselves in the long run. On the other hand, beware of bargain goats. There’s no such thing as a free goat! If someone offers goats for next to nothing, ask why. You want to get a suitable goat the first time around rather than going through a bunch of cheap goats that don’t fit your needs or keeping unsuitable goats because you’ve gotten attached to them.

Getting only one goat

In almost all cases, getting only one goat is a recipe for trouble. Goats are not dogs and do not thrive on human companionship alone.

Goats are herd animals and need other goats to keep them healthy and happy. A goat without a friend will cry and can even become depressed. Never get just one goat; always buy at least two goats so they can keep each other company.

Dogs, pigs, and cows are not the best friends for a goat. Sheep, rabbits, and horses can be friends with goats. Goats have traditionally been kept with racehorses and are known to have a calming effect on them. Remember that if you do decide to bond your goat with an animal other than another goat, the animal needs to stay with the goat.

People with small farms who have only a few animals sometimes keep a goat and a sheep together. This situation has certain risks:

A lot of people are tempted to buy goats at an auction where they can get a “good deal.” Although some of these animals may be a good deal, you can’t tell by looking at them whether they have an underlying health problem. Many owners of large herds take their goats to auction to get them out of the herd because they have an illness or don’t meet their herd requirements, so either don’t take that chance or be prepared for a negative outcome.

I am not discounting those among us who rescue injured or sick animals. I am just warning against inadvertently buying a goat that may be sick. If you have other goats, you can bring diseases from the sale barn that affect your herd.

When you buy from a breeder, look closely at the goats and make sure to ask about the goats’ health, the herd's health, and whether they have been tested for certain diseases. Get a contract so that you have legal recourse if you later find that the goat had a pre-existing health problem.

Properly caring for goats is a daily job. In most cases, goats need to be fed and given clean water twice a day. In addition, they require periodic hoof trimming, routine medical care, handling, and grooming. If you let these responsibilities slide, the goat is defenseless, much like a child who relies on you.

Neglecting routine care adds to your workload because you have to work twice as hard to catch up. Worse, you put your goats at risk of poor health when they have to drink from dirty buckets, eat hay off the ground, and walk on overgrown hooves. Don’t make this mistake; set a routine that you and your goats can rely on.

Unless you have a huge acreage that is covered with plentiful weeds and other plants that goats like to eat, you need to buy them hay. Don’t expect your goats to spend their time eating grass on a lawn; they like a variety of plants, which is why they’re considered browsers rather than grazers.

Goats also need mineral supplementation, which varies according to the part of the country you live in. Different areas are deficient in different essential minerals and you need to provide those in the proper amounts. Dairy goats that you are milking also need grain, alfalfa, and sunflower seeds to keep their production high and their milk rich in butterfat.

You get back what you put into a goat, and even pets or goats whose job is just to clear the property will be healthier if they are fed right.

Giving the goats too little attention

Although they have been domesticated for over 10,000 years, goats are quick to return to a feral state. This means that they need attention and handling if they’re to remain friendly.

Often, goat owners avoid only certain goats—maybe the smelly bucks or the skittish members of the herd that require effort to catch. These goats then get harder and harder to catch for routine care.

You can avoid this mistake and make goat ownership easier on yourself by taking time to interact with your goats several times a day, when you change their water or feed them. At the same time, you can do a daily visual herd check to make sure that they aren’t showing any signs of illness.

If you decide to breed your goats, make sure to handle the kids regularly while they’re still small. You can’t just let them run with the adults and have no human contact and then expect that they’ll easily warm up to you.

Getting a buck before you’re ready

Bucks are not for everyone. Raising a buck is a big responsibility and an aromatic proposition. Bucks don’t normally make good pets, and you shouldn’t get one with that idea in mind. If you want pets, start with a wether or, if you must, does. They don’t stink and are not as strong and aggressive.

If you’re raising goats for milk or meat, ask about leasing a buck from the breeder where you bought your does, or doing a driveway breeding instead of purchasing your own buck. You’ll save money in feed and housing, and your property will smell better. You’ll also be spared the expense of owning at least one other goat in addition to the buck—a wether—so the buck has a needed friend.

If you start a herd with two does that you want to breed, I can almost guarantee that you will want to keep one of the bucks that is born the next year. If you have already purchased a buck, now you will have two fighting, reeking animals that need a separate pen.

Because bucks are the basis of your breeding program, think it through before you buy your own buck. You won’t regret it.