Explore Book Buy On Amazon
Goats are mammals and are similar to other mammals in some ways. But they also have unique features that indicate whether they are healthy, tell you how old they are, and even give clues about their parents. 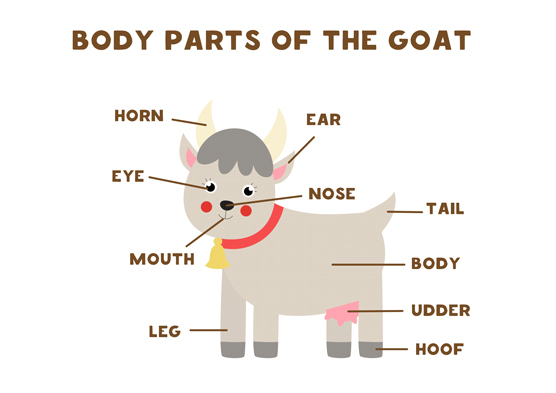 Parts of the body

You can own goats and not know the names of parts of their bodies. But if you want to have an intelligent discussion with other goat aficionados or show your goats, knowing the correct terminology is essential.

We all can identify an ear or a neck. But the names of other body parts may be new to you if you haven’t raised animals before. Here are some terms for different body parts:

Goats are ruminants, which means that they have four stomach compartments and part of their digestive process includes regurgitating partially digested food and chewing it, called ruminating. This kind of digestive system needs a plant-based diet.

Understanding a goat’s digestive system and how it works helps you keep your herd healthy and identify potential problems.

The goat stomach consists of three forestomachs — the rumen, reticulum, and omasum — and a true stomach, the abomasum. The forestomachs are responsible for grinding and digesting hay, with the help of bacteria. The last compartment, the abomasum, is similar to the human stomach and digests most proteins, fats, and carbohydrates.

Each stomach compartment has a different function, and they all work together:

This repetitive process, rumination, creates methane gas as a byproduct. Methane is the cause of the strong-smelling belches that you can expect from a goat with a healthy rumen. A goat that can’t belch has bloat. The rumen action also creates heat, much like a compost pile, which helps a goat stay warm.

This process continues until the pieces are small enough to pass through to the omasum. The reticulum also catches harmful things, such as wire or nails, that a goat accidentally swallows.

When something goes wrong with a hoof, the rest of the musculoskeletal system is affected, which can cause pain, limping, lameness, and a shorter lifespan.

Because they don’t like to stand in one place to eat, goats don’t do well if they have to lie around or walk on their knees. (Yes, knees.) I recently saw goats on television whose owners had fed them well but apparently hadn’t trimmed their hooves for years. (The goats’ hooves were almost a foot long and curled up at the ends. Consequently, many of them couldn’t even walk, and others walked on their knees, dragging their rear feet. That had to hurt!

Untrimmed hooves make a goat prone to foot scald or rot, which can ultimately kill a goat. Goats’ hooves do best in dry, rocky climates. Goats that are feral or were feral for years, such as the Spanish goat, need less hoof care than closely bred, farmed goats.

A proper goat hoof is rhomboid-shaped (not rectangular, but slightly longer in the front than in the back) and has no overgrowth on the sides or front. Trim your goats hooves regularly to ensure that they maintain this shape.

Goats have lower teeth in the front of their mouths but only a hard pad on the top. They also have back teeth on both top and bottom, which you will painfully discover if you put your finger into the back of a goat’s mouth! The back teeth are used for cud-chewing.

Baby goats get their first teeth before birth, at around 98 to 105 days of gestation. They lose these baby teeth, just like other mammals. You can generally determine the age of a goat by looking at the eight teeth in the goat’s lower front jaw. This is called toothing a goat.

Toothing a goat is not completely accurate because you can find variances among goats. They may lose some teeth and grow new ones at different times, or their diet or health can influence how their teeth grow.

Here’s a guide to toothing a goat:

After five years, you can guess at the goat’s age by looking for wear on the teeth and missing teeth. This will vary a lot, depending on the goat’s diet.

Most but not all goats have beards. The male’s beard is more majestic than the female’s beard. Although the purpose of the beard is unknown, it’s great for capturing that unique scent that males like to flaunt during breeding season. If you’re having trouble telling whether an animal is a goat or a sheep, look for a beard — only goats have them. (But not all goats have them.) The table below tells you more about distinguishing goats from sheep.

A wattle is a fleshy decoration that hangs from the goat’s neck just past where the chin attaches. Wattles are more common in dairy goats and pygmy goats. Most goats have two, although I have had a goat born with only one. They are a genetic trait — at least one parent has to have wattles for a kid to be born with them.

Most goats will grow two horns (yes, even the females) unless they’re disbudded shortly after birth. A minority of goats are naturally hornless, a trait called polled. Although polled goats are desirable because they save some work for the owner and some pain for the goat, in some dairy breeds, if you breed polled goats to each other, you may have a higher incidence of intersex goats (goats that have male and female sex traits).

Intersexuality in goats is a recessive characteristic seen only in females, which causes infertility. The one intersex doe who came from my farm acted like the worst kind of buck — constantly blubbering and mounting her pen mates.

The way to tell if a goat is polled (at least one parent must be polled for a goat to inherit the trait) is to look for the lack of a swirl on the head where the horns grow. Eventually, the polls will grow into rounded bumps — like a giraffe has, only much shorter.

A goat’s pupil is rectangular rather than round like other animals’. A lot of people say they are creeped out by goat’s eyes, but according to the Los Angeles zoo, they have an important function. Goats have excellent night vision, which enables them to avoid predators and browse at night. I can vouch for the night browsing, although my goats are out at night eating under a full moon more often than any other time.

Goats’ eye color ranges from yellow to brown to blue. Angora goats sometimes inherit a condition where facial hair covers their eyes, which harms their vision and their ability to browse.

How to tell a goat from a sheep

Believe it or not, some goats look very similar to sheep! Check out the table below to learn the distinguishing features of both animals.