What to Do If You Lose Your Hive’s Queen Bee

By: Howland Blackiston and
Updated: 06-23-2021
From The Book: Beekeeping For Dummies

Explore Book Buy On Amazon
It’s every beekeeper’s nightmare: The queen is dead, or gone, or lost. Whatever the reason, if the colony doesn’t have a queen, it’s doomed. That’s why you must confirm that the queen is alive and well at every inspection.

If you come to the dismal conclusion that your colony is queenless, you can do two things: Let the colony raise its own queen or introduce a new queen into the colony.

If you are a new beekeeper, don’t panic if you can’t find your queen. Most of the time the queen is in the hive. It’s just that the new beekeeper has not yet become adept at spotting her. If you can’t find the queen (she’s easy to miss, as she doesn't usually wear her tiara), look for eggs or very young larvae. That’s a sure indication she was there just days ago.

Letting the colony replace the queen

To let the colony create a new queen, it must have occupied queen cells or cells with eggs. If eggs are available, the worker bees will take some of them and start the remarkable process of raising a new queen. When the new virgin queen hatches, she will take her nuptial flight, mate with drones, and return to the hive to begin laying eggs.

If no eggs are available for the colony to raise a new queen, you must take matters into your own hands and order a new queen from your beekeeping supplier. Or you can find out how to raise your own queen.

The colony must have eggs to create its own queen. Older larvae or capped brood are at too late a developmental stage to be transformed into new queens.

A faster solution than the au natural method is to order a replacement queen from your bee supplier. Within a few days, a vigorous queen will arrive at your doorstep. She’s already mated and ready to start producing brood. A bee fit for royalty, indeed.

The advantages of ordering a queen are clear:

Introducing a new queen to the hive

After your queen arrives by mail, you must introduce her into the colony. Doing so can be a little tricky. You can’t just pop her in: She’s a stranger to the colony, and the bees are sure to kill her. You have to introduce her slowly. The colony needs time to accept her and become accustomed to her scent. If the weather is mild (over 60 degrees Fahrenheit at night), you can introduce the queen cage on the bottom board. Remove the cork to expose the candy plug. Slide the cage screen side up along the bottom board and situate it toward the rear of the hive. Use your hive tool to nudge it as far to the rear of the hive as possible. Leave the bees alone for one week, and then inspect the hive to determine that the queen has been released and that she is laying.

Use a flashlight to peer into the back of the hive to see if the hole in the cage is clear. If yes, the queen has likely been released. 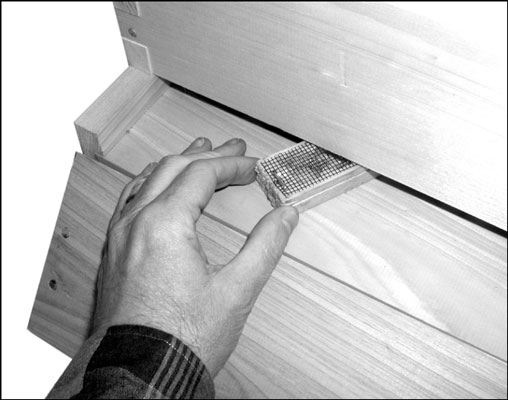 Sliding a queen cage onto the bottom board
You know what they say, "Long live the queen — and replace her whenever necessary." Or something like that.