What Makes a Queen Bee a Queen?

By: Howland Blackiston and
Updated: 09-23-2020
From The Book: Beekeeping For Dummies

Explore Book Buy On Amazon
For beekeepers, it's all about the queen bee: Is your queen healthy? Is your queen still in the hive? Is she safe? But, what differentiates the queen been from the other honey bees? What makes a queen bee a queen? 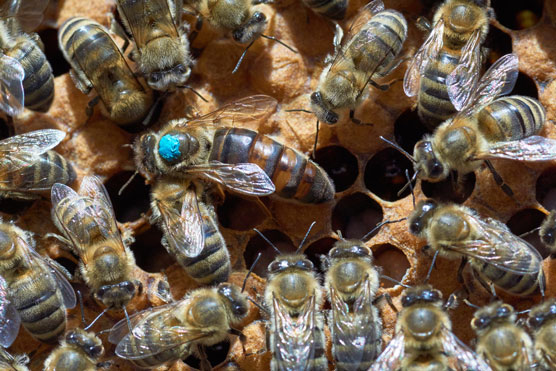 All female bees start out the same way: from a fertilized egg. After two to three days, the fertilized egg of the bee destined to be a queen hatches into a young larva, just as with worker bees. All the newly hatched larvae are fed royal jelly. A day or two after the egg hatches into a young larva, it’s decision time. A larva that goes down the road to queendom continues to receive a plentiful supply of rich royal jelly, and only royal jelly. But larvae that will become workers are switched to brood food, which is a nourishing but coarser diet of honey and pollen.

Here’s how the queen’s development proceeds and a few notes for your queen-rearing efforts:

The empty queen cell will be left with a circular hole in the bottom for a time, then the bees will begin tearing it down.

A virgin queen running loose in a colony is hard to spot. A virgin queen is often on the small side, not much larger than a worker (she’ll plump-up after she mates). She walks quickly and without the stately pace of a mated queen. The other bees don’t pay her much attention — there’s no entourage of attendants circled around her. So, if you don’t find her, don’t worry. A virgin emerging from a cell into a queenless colony is very likely to be accepted — hey, she’s the only game in town.