Making One Langstroth Hive from Two

Explore Book Buy On Amazon
Keep in mind that it's better to go into the winter with strong bee colonies — they have a far better chance of making it through the stressful cold months than do weak ones. If you have a weak hive, you can combine it with a stronger colony. If you have two weak hives, you can combine them to create a robust colony.

But you can't just dump the bees from one hive into another. If you do, all hell will break loose. Two colonies must be combined slowly and systematically so the hive odors merge gradually — little by little. This is best done late in the summer or early in the autumn (it isn't a good idea to merge two colonies in the middle of the active swarming season).

This favorite method for merging two colonies is the so-called newspaper method. Follow these steps: 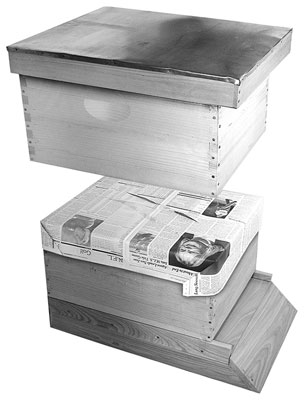 A weak colony can be combined with a strong colony by using the newspaper method.