Honey bees make use of five senses throughout their daily lives; however, honey bees have additional communication aids at their disposal. Two of the methods by which honey bees communicate are of particular interest. One is chemical, the other choreographic.

Pheromones are chemical scents that animals produce to trigger behavioral responses from the other members of the same species. Honey-bee pheromones provide the “glue” that holds the colony together. The three castes of bees produce various pheromones at various times to stimulate specific behaviors.

Perhaps the most famous and fascinating “language” of the honey bee is communicated through a series of dances done by foraging worker bees who return to the hive with news of nectar, pollen, or water. The worker bees dance on the comb using precise patterns. Depending upon the style of dance, a variety of information is shared with the honey bees’ sisters. They’re able to obtain remarkably accurate information about the location and type of food the foraging bees have discovered.

Two common types of dances are the so-called round dance and the waggle dance. The round dance communicates that the food source is near the hive (within 10-80 yards).

For a food source found at a greater distance from the hive, the worker bee performs the waggle dance. It involves a shivering side-to-side motion of the abdomen, while the dancing bee forms a figure eight. The vigor of the waggle, the number of times it is repeated, the direction of the dance, and the sound the bee makes communicates amazingly precise information about the location of the food source. 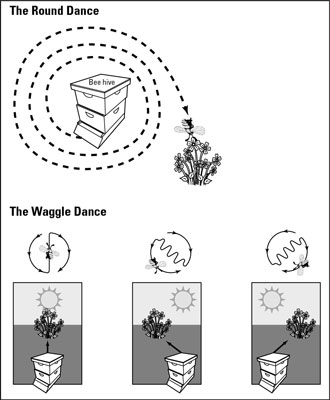 The dancing bees pause between performances to offer potential recruits a taste of the goodies they bring back to the hive. Combined with the dancing, the samples provide additional information about where the food can be found and what type of flower it is from.