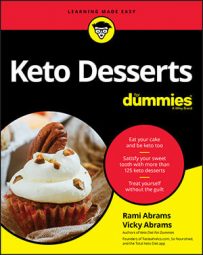 Explore Book Buy On Amazon
Baking requires flour, but traditional sources of grains (such as wheat or rice) are high in carbs, requiring you to find suitable substitutes if you are following a keto diet plan. Wheat flour is an incredibly flexible ingredient and has been a cornerstone of food prep ever since the Agricultural Revolution occurred. As a result, the majority of keto dessert recipes are designed with the unique properties of wheat flour in mind, and no universal replacement can replicate all of its features.

However, you typically can get pretty close with various combinations of the following flour substitutes. Knowing the properties of the flour you’re using can help you understand how to fit it into this new realm of baking you’re about to experience.

If you live in a rural area, finding appropriate substitutes at smaller grocery stores can be difficult. The popularity of Internet-based shopping may just solve this problem for you: you can order online from a variety of major retailers.

Almond flour is first boiled to remove the skins, then ground into powder, whereas almond meal is made from nuts that were ground with their skins intact, resulting in a courser texture. Each is appropriate to use, depending on the kind of results you want to see.

Both are packed with vitamins and minerals, low in carbs, and high in both healthy fats and fiber. They’re also high in magnesium, which is beneficial to everyone but can be particularly helpful with people who have Type 2 diabetes. Scientists estimate that between 25 and 38 percent of those with Type 2 diabetes have a magnesium deficiency, which can increase resting blood sugar levels and insulin resistance. Correcting this mineral deficiency can accentuate keto’s beneficial results for those individuals who deal with this condition. Almond meal and flour are also gluten-free, so if you have a gluten allergy, they’re great to use.

Almond flour is one of the easiest substitutes to use and can often replace wheat flour without any other substitutions or complicated measurements. Almond flour is substantially heavier than wheat flour, resulting in baked goods that are flatter and denser. Although calories are less of a consideration on keto than other diets, note that almonds contain about 60 percent more calories than equivalent amounts of wheat. The good news is that even though wheat flour is comprised of relatively empty calories, almond flour is packed with nutrients that make up for the caloric increase.

Coconut flour is low in carbs and high in both protein and fiber, making it an excellent fit for low-carb macro levels. It’s gluten-free and packed with the good stuff: two tablespoons of coconut flour has 1.5 grams of fat, 3 grams of protein, and 5 grams of fiber. It’s also rich in manganese, a nutrient that supports bone health and is used in multiple biological processes within your body. 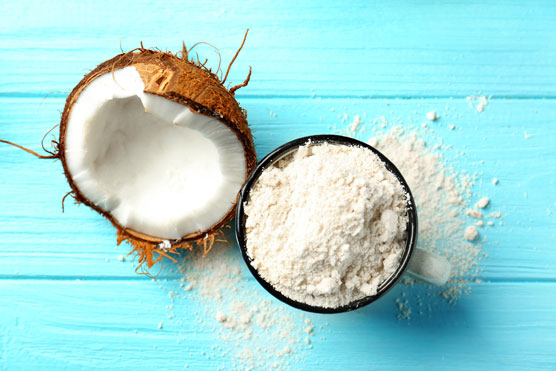 The downside of this flour substitute is that it’s incredibly absorbent and tends to have a drying effect on baked goods. If you don’t compensate for this property adequately, you’ll end up with dry, crumbly products that have you craving milk.

Here are a couple ways to mitigate the gritty texture: We mention flax meal here because although it is meal, it’s much more useful as a liquid replacement than a flour alternative. One cup of ground flaxseed can replace 1/3 cup of oil or butter. Flax meal is also an excellent resource if you’re vegan because you can use it as an egg substitute. The overall result is a product that’s slightly denser, chewier, gummier, and browns a bit more easily than when using eggs. Two main types of flaxseed are golden and brown. Both have similar properties and identical nutrition profiles and you can use them interchangeably.

Flaxseed has a hard coating that’s designed by nature to be as impervious as possible, so it should be ground into meal to maximize its benefits. Otherwise, you’ll find that many of the seeds pass through your entire digestive system without being digested. You can use a coffee grinder to turn flax seeds into meal right before you’re ready to use it.

Sunflower seed flour has properties comparable to almond flour, making it a possible substitute if you have nut allergies. It’s rich in fiber and protein and has a pleasant, mildly sweet flavor. The major issue with this alternative is that it’s relatively high in carbs, with approximately 20 grams of net carbs per cup.

You can’t find this flour on many store shelves, but you can easily make it at home using a food processor or coffee grinder. Pulse until the seeds have reached a powdery consistency and then stop immediately. Because of the high oil content, blending too much can quickly transform it into sunflower seed butter rather than flour. You’ll also want to use it fresh, because storing it in powder form can cause the oils to go rancid relatively quickly. As a side note, if you use this flour with baking soda, you’ll see tiny green specks in your final products, which is a result of the chemical reaction between these two substances and is perfectly safe to eat.

Pumpkin seed flour has been increasing in popularity among low-carb dieters due to its high fat content (approximately 50 percent of pumpkin seed is comprised of healthy fats). It’s relatively low in carbs, with approximately 14 grams per 1 cup/130 gram serving. This material has similar properties to wheat flour in many regards and can be used as an approximate replacement for almond flour in many recipes, although its high oil content makes it a poor choice for a sole source of flour. Most alternative bakers recommend using pumpkin seed flour for no more than 50 percent of flour mass in a given recipe.

Psyllium husk is a vital material to reference as a binding agent. In wheat flour recipes, gluten serves to thicken dough, trapping air bubbles, and producing light and fluffy baked goods. Alternative flours tend to be denser, but adding psyllium husk can mitigate this effect significantly. Because it’s a binding agent, you can use it in drier flours like coconut flour that tend to be crumbly.

Rami Abrams and Vicky Abrams are entrepreneurs and devoted foodies who were so impressed by how keto transformed their lives that they founded Tasteaholics.com, a leading low-carb lifestyle blog; Total Keto Diet, one of the most popular keto apps; and So Nourished, a low-carb product company, to help share keto's health benefits around the world.

Rami Abrams and Vicky Abrams are entrepreneurs and devoted foodies who were so impressed by how keto transformed their lives that they founded Tasteaholics.com, a leading low-carb lifestyle blog; Total Keto Diet, one of the most popular keto apps; and So Nourished, a low-carb product company, to help share keto's health benefits around the world.