Eight Reasons Wheat May Not Be Good for Anyone 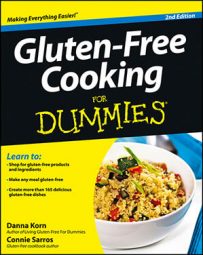 Wheat's not good for anyone, whether you have gluten sensitivity, celiac disease, or neither. Although wheat does offer some health benefits, the same benefits can easily be found in other foods without the unpleasant side effects that many, if not most, people experience. Here are eight reasons wheat isn't good for you:

The human stomach doesn't fully digest wheat. Cows, sheep, and other ruminant animals do just fine with wheat because they have more than one stomach to fully break down wheat and complete the digestion process. Humans have only one stomach. When the wheat leaves our tummies, it's not fully digested. Those undigested portions begin to ferment, causing uncomfortable gas and bloating.

Wheat is a pro-inflammatory agent

Pro-inflammatory foods rapidly convert to sugar, causing a rise in the body's insulin levels, causing a burst of inflammation at the cellular level. The inflammation occurs in all people, not just those with wheat or gluten sensitivities. Inflammation, once thought to be limited to "-itis" conditions like arthritis, may actually be at the root of a number of serious conditions, including heart disease, Alzheimer's, and some types of cancer.

Wheat can cause leaky gut syndrome

In general, leaky gut syndrome is a condition whereby stuff is leaking from your gut into your bloodstream — stuff like toxins and large molecules like gluten. Eating wheat makes bodies produce extra amounts of a protein called zonulin, which helps regulate the passage of nutrients into the bloodstream. High zonulin levels enable things to get into the bloodstream.

Most of the wheat people eat is refined, which means manufacturers take perfectly good wheat — which has some nutritional value, especially in the bran and germ — and they take the good stuff away. Sadly, most of our wheat-based products use refined, making them high–glycemic index foods.

Wheat may cause wrinkles

According to some experts, the inflammatory effect of wheat — especially refined wheat — can cause skin wrinkles. The most famous of these experts is Dr. Nicholas Perricone, a dermatologist and adjunct professor of medicine at Michigan State University. Although Dr. Perricone doesn't pinpoint gluten as a culprit per se, he does say that avoiding foods like wheat may help reverse the aging process.

Wheat is one of the top-eight allergens

Millions of people are allergic to wheat — so many, in fact, that it has made it onto the top-eight allergen list. Allergic reactions to wheat can include gastrointestinal distress (stomach upset), eczema, hay fever, hives, asthma, and even anaphylaxis (a severe, whole-body allergic reaction), which is life-threatening.

Our bodies are designed to work with stable blood sugar levels. When they're erratic, it causes a domino effect of not-so-healthy things to occur, such as hypoglycemia — low blood sugar. Most people don't have "true" hypoglycemia, but may feel hypoglycemic when their blood sugar drops too much. The problem with the idea of "fixing" this feeling with sugary foods is that it just continues this roller coaster of blood sugar levels. One of the most serious conditions that can result from blood sugar whiplash is insulin resistance and diabetes.

Wheat can make you fat

Eating wheat creates "sneaky fat" — the kind that sneaks up on you when you think you're doing everything right. It could just be the wheat — especially refined wheat. Refined wheat is a high–glycemic index food that causes your blood sugar to spike. That makes your body produce insulin, which, by the way, is often referred to as the "fat-storing hormone."

Danna Korn is a respected and leading authority on the gluten-free diet and the medical conditions that benefit from it. She has been featured in People Magazine, on ABC's 20-20, and dozens of other national media outlets. Connie Sarros is a nationally recognized advocate for healthy eating and nutrition whose work has appeared in Cooking Light, the Chicago Tribune, and other publications.