What Is the Glycemic Index/Glycemic Load?

The glycemic index of carbohydrate containing foods was originally developed in 1981 at the University of Toronto. Recognizing that different foods affect blood glucose differently, researchers fed carbohydrate foods to fasting volunteers and monitored their fasting blood glucose response over the following two hours.

The blood glucose response to eating pure glucose serves as a benchmark, affecting levels more quickly and more profoundly, and a little math produces a GI number which compares other foods to glucose. The GI number of glucose is set at 100, and GI values between 70 and 100 are labeled as high, between 56 and 70 as medium, and values of 55 and below are considered low. 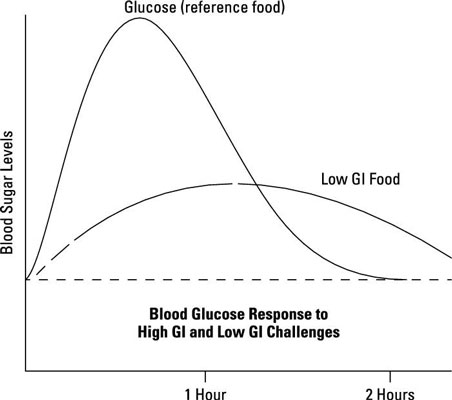 Note with the higher GI food blood glucose levels not only go higher, but also begin to rise more quickly.

The following table shows the GI value of common foods, but before you look at that comparison, consider why these numbers vary so much. The impact of a food on blood glucose depends upon the speed of digestive processes, how efficiently free glucose is absorbed into the bloodstream, and how quickly insulin begins to help move glucose out of the bloodstream and into cells.

High fiber content, longer chain carbohydrates, how starch molecules are entrapped within the food, whether a food contains both carbohydrate and fat, and unknown factors can slow stomach emptying, slow the liberation of glucose from carbohydrate chains, or interfere with glucose absorption in the small intestine to impact the blood glucose response. Your insulin status is a key issue when evaluating what the glycemic index means to you.

There are two issues to consider about the practical use of the glycemic index. First, different foods contain different amounts of carbohydrate. The blood sugar response of volunteers is measured after eating a particular food in an amount that contains 50 grams of carbohydrate.

For glucose this would be 50 grams (about 4 tablespoons), because it’s all glucose. For cabbage, getting 50 grams of carbohydrate would mean eating 10 cups of shredded cabbage, or about 800 grams (the GI of cabbage was probably estimated). There is simply not nearly as much glucose in cabbage as there is in glucose.

A second calculation takes this variation in the amount of carbohydrate in the same weight or volume of different foods into account. Glycemic load is designed to estimate how much a certain amount of a certain food raises blood glucose compared to eating 1 gram of glucose. Here’s where using glycemic index, and by extension glycemic load, in your daily life could become a problem.

To be clear, knowing the glycemic index of foods gives you a great tool. Eating foods with a low glycemic index value, that gradually release glucose into the bloodstream, may allow your abnormal response to insulin to still keep pace with rising blood glucose levels when you have type 2 diabetes.

If you take insulin by injection or through an insulin pump, knowing the GI of foods can be useful in timing your injections or bolus. Just be extremely cautious about taking glycemic index and glycemic load as absolute numbers.

Because different foods affect the absorption of carbohydrates differently, the glycemic index also varies according to the accompanying food. It’s not an exact science, but lower glycemic foods are generally better for your blood glucose control than higher glycemic foods.