Modifying the USDA MyPlate for Diabetes

In 2011, the USDA replaced its pyramid with MyPlate, a visual representation of relative portion sizes for different food groups in a dinner place setting, including a dinner plate and a separate section for dairy. The figure shows the current official icon representing the general categories of food that make up a healthy diet, showing recommended portions of protein, grain, fruit, vegetables, and dairy. 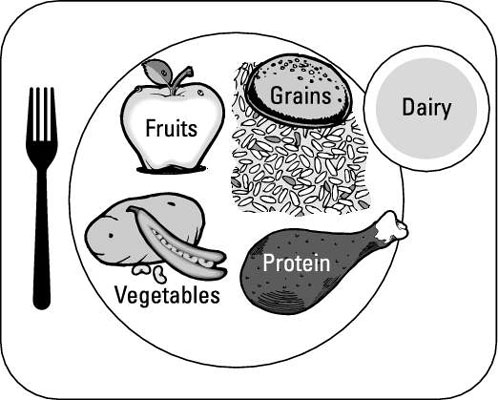 One key take-home message is that vegetables and fruits should make up one half of your plate, more or less.

In 1992 the U.S. Department of Agriculture published its first Food Guide Pyramid. The idea was to demonstrate how foods represented as the wider base of the pyramid — whole grains — should be consumed in greater quantities than the foods associated with the tiny tip of the pyramid — fats, oils, and sweets.

The USDA pyramid was revised in 2005 to an image that represented the various food groups in colorful vertical sections, rather than stacked in layers, complete with a stairway and a stickman. Other pyramids, including one developed by the World Health Organization, have followed the original Swedish version put out in 1972.

All of the pyramids have been criticized by nutrition professionals for misrepresenting, or failing to clearly articulate, various aspects of a healthy diet. Ultimately, the pyramid concept may have resonated with ancient Egyptians, but was too abstract for the general public.

Unfortunately, the USDA MyPlate doesn’t address the particulars of a diabetes eating plan, where identifying carbohydrate foods is the key to success.

Although it’s not completely obvious looking at the icon, the official MyPlate has carbohydrate foods spread through every single category, because beans are included in the protein group, and starchy vegetables like potatoes and corn are included in the vegetable group. Fruits, grains, and dairy, except for cheese, are always considered carbohydrates.

You could make the case that MyPlate encourages you to get your carbohydrates from a variety of different food groups, and that certainly fits in with a healthy diabetes eating plan. The importance of segregating carbohydrate foods, and increasing your consumption of low-carbohydrate vegetables, really justifies a special plate for people with diabetes.

Following is a variation of USDAs MyPlate adjusted for people with diabetes. 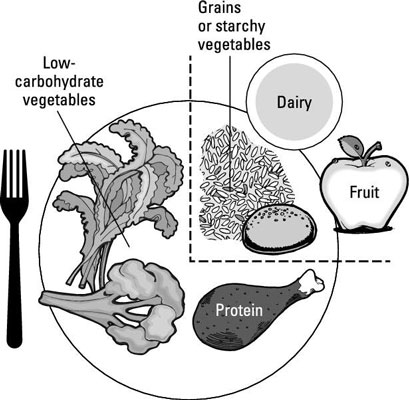 This representation of your plate emphasizes two important healthy eating strategies. Eat lots of nonstarchy vegetables — cover half of your plate. Nonstarchy vegetables are low-calorie, low-carbohydrate, packed with vitamins and essential nutrients, and keep you feeling full. Also, limit your protein portion to about one-quarter of your plate, usually about three ounces (no fair cutting your 16-ounce T-bone into pieces and stacking them high).

Most importantly, this plate gathers the carbohydrate foods together — grains, fruit, starchy vegetables and beans, and dairy (except for cheese). From this group you select the appropriate number of carb choices your meal plan recommends for each meal.