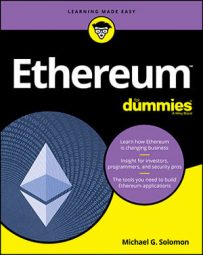 Explore Book Buy On Amazon
Ethereum is a comprehensive, decentralized application platform that expands the range of capabilities beyond what was possible before blockchain technology. So, what sets it apart from other decentralized platforms? Here’s a bit of Ethereum background.

Bitcoin was the first blockchain technology application. It was revolutionary and defined the first widely used digital currency, called cryptocurrency. The crypto part of the name refers to the use of cryptographic hashes to ensure the integrity of the blockchain. The shared ledger literally keeps a copy of every cryptocurrency transaction that gets verified by all nodes.

Using this approach, bitcoin created a permanent record of every exchange of their cryptocurrency. And, because account owners are identified only by an address, bitcoin has always enjoyed a measure of anonymity.

Although bitcoin addresses aren’t linked directly to people, many exchanges have records of identities that are related to addresses. At some point, you have to exchange your cryptocurrency for real currency. That switchover point is where many law enforcement officials focus when they’re trying to track down criminals using cryptocurrency.

As bitcoin became more and more popular, researchers began to see more applications for blockchain technology beyond cryptocurrency. In 2013, Vitalik Buterin, the cofounder of Bitcoin Magazine, published a whitepaper that proposed a new, more functional blockchain implementation. This new proposal was for the Ethereum blockchain. After gaining interest and attracting technical and financial support, the Ethereum Foundation, a Swiss non-profit organization, was founded and became the developer of Ethereum.

Ethereum wasn’t created just to exchange cryptocurrency. In fact, it was designed from the beginning to be different. The core features of Ethereum are the smart contract and ether.

Ether is the native cryptocurrency that Ethereum supports, although you can create your own tokens to exchange value in many other forms. Smart contracts provide an execution environment that ensures integrity across all nodes. Any code that executes on one node executes the same way on all nodes. This guarantee makes it possible to deploy a wide range of applications across untrusted environments.

The foundational guarantees Ethereum provides support many types of value exchanges without the concern about fraud, censorship, or any involvement by a third party. When you interact with an Ethereum application, you don’t have to rely on any intermediary to broker your transactions. You don’t need a bank, wholesaler, or transaction broker to provide trust. As a result of Ethereum’s disintermediation, you can often complete transactions faster, with far lower service fees and without requiring approval from external authorities.

Whereas legacy solutions to data and process sharing required third-party authorities to enforce integrity, Ethereum provides process and data integrity, along with disintermediation. The possibilities are just beginning to be explored.

Ethereum provides integrity in the way it implements immutability and smart contracts. Immutability isn’t actually a blockchain guarantee. You can change data in any block — even after other blocks are added to the blockchain. However, as soon as you change a block, that block and all subsequent blocks fail integrity checks and your node is out of sync. Instead of saying that the blockchain is immutable, it is more accurate to say that any changes (mutations) to the blockchain are easily and immediately detected.

Ethereum is based on democracy. Each node gets an equal vote. Every time nodes get a new block to add to the blockchain, they validate the block and its transactions, and then vote whether to accept or reject the block. If several different blocks are submitted by different nodes, only one of the blocks can receive votes from a majority. The block that gets more than half of the network node’s votes gets to join the blockchain as its newest block.

One of the first problems is to determine when a new block is ready for the blockchain. When too many conflicting blocks are submitted, the voting process slows down. Ethereum makes it hard to add new blocks to keep the number of new block collisions low and to make voting faster. Ethereum uses a consensus protocol called Proof of Work (PoW), which sets the rules for validating and adding new blocks. PoW makes add blocks to the blockchain difficult but profitable.

Ethereum defines ether as its cryptocurrency. You can transfer ether between accounts or earn it by doing the hard work of adding blocks to the Ethereum blockchain. The Ethereum PoW mechanism requires that nodes find a number that, when combined with the block’s header data, produces a cryptographic hash value that matches the current target, which is a value that is adjusted to keep new block production at a steady rate.

Finding a hash value that matches the current target is hard. You have to try on average more than a quadrillion values to find the right one. That’s the point. Using a PoW mechanism makes it so hard to submit a block that fewer blocks are submitted, which reduces the number of collisions. The node that finds the right value gets a small ether payment for the effort. This process is called mining, and the node that wins the prize is that block’s miner.

Mining regulates the speed at which new blocks get submitted as candidate blocks, and results in a number that is easy to validate. Finding the right number to solve the puzzle is difficult, but verifying the number is fast and easy. Another interesting aspect of mining is that each block’s header contains a hash from the previous block. Ethereum nodes use the hash to easily detect unauthorized block changes. If a block changes, the hash result doesn’t match and the block becomes invalid.

Mining cryptocurrency is also a way to make money using blockchain technology. Mining has become competitive, and most of today’s miners invest in high-performance hardware with multiple GPUs to carry out the complex operations. To keep the mining process fair, Ethereum uses a complexity value that makes the mining process even harder as miners get faster. Adjusting the complexity allows Ethereum to regulate the new block frequency to an average of one new block every 14 seconds.

The glue that holds the Ethereum environment together is the smart contract. Ethereum is much more than just a financial ledger, and smart contracts provide much of its rich functionality. Each Ethereum node runs a copy of the Ethereum virtual machine (EVM).

One of the known weaknesses with software is that attackers can sometimes bypass its controls and carry out unintended actions. That type of attack is more difficult in Ethereum, primarily due to its smart contract implementation. Attackers can’t directly attack the blockchain and make unauthorized changes because any such changes will be immediately detected

The Ethereum platform as a whole offers possibilities that extend beyond the current uses of blockchain.