How to Classify Trends in a Time Series Regression Model

To estimate a time series with regression analysis, the first step is to identify the type of trend (if any) that's present in the data. The type of trend, such as linear or quadratic, determines the exact equation that is estimated.

In the case where a time series doesn't increase or decrease over time, it may instead randomly fluctuate around a constant value. In this case, the time series has no trend. The trend equation is set equal to a constant, which is the intercept of a regression equation:

When no trend occurs, the values of the time series may rise or fall, but on average they tend to return to the same level

This figure shows a time series with no trend. 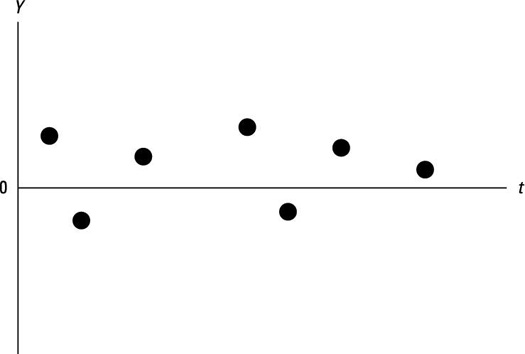 A time series without a trend.

Notice that the values of Y are randomly rising and falling; there is no clear pattern in the data.

With a linear trend, the values of a time series tend to rise or fall at a constant rate

The linear trend is expressed as 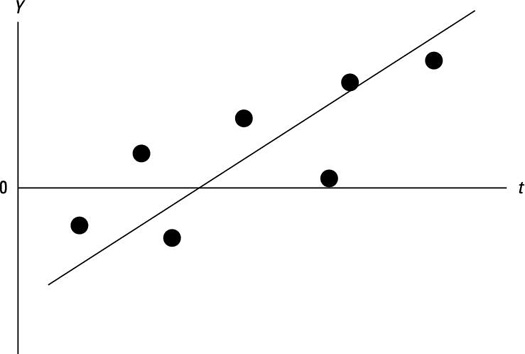 A time series with a positive linear trend.

Note that as t increases (such as time elapses), Y tends to increase on average. The trend line drawn through the values of Y has a positive slope, indicating that Y has a positive linear trend.

With a quadratic trend, the values of a time series tend to rise or fall at a rate that is not constant; it changes over time. As a result, the trend is not a straight line. The trend is expressed as

The following figure shows a time series with a quadratic trend. In this case, the value of yt increases at an increasing rate over time. 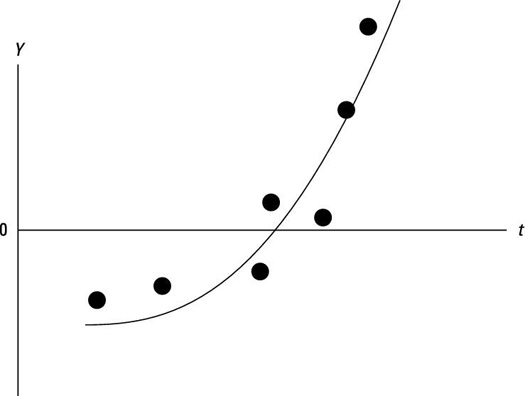 A time series with a quadratic trend.

Note that as t increases (such as time elapses), Y tends to increase at an increasing rate. The trend is curving upward; this type of curve indicates that the Y has a positive quadratic trend.

It's possible that a trend may contain terms that are raised to the third power, fourth power, or higher. This type of trend is extremely rare in business applications. Most time series of financial data have a linear trend, a quadratic trend, or no trend at all.