For example, say a manufacturer randomly chooses a sample of four Electrica batteries, four Readyforever batteries, and four Voltagenow batteries and then tests their lifetimes. This table lists the results (in hundreds of hours).

The following table shows the appropriate indexes for all the elements in first table.

The error sum of squares is obtained by first computing the mean lifetime of each battery type. For each battery of a specified type, the mean is subtracted from each individual battery's lifetime and then squared. The sum of these squared terms for all battery types equals the SSE.

SSE is a measure of sampling error. This refers to the fact that the values computed from a sample will be somewhat different from one sample to the next.

To compute the SSE for this example, the first step is to find the mean for each column. So, for example, you find the mean of column 1, with this formula:

Here's what each term means:

So, using the values in the first table, you find the mean of column 1 like so: 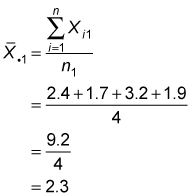 Similarly, you find the mean of column 2 (the Readyforever batteries) as 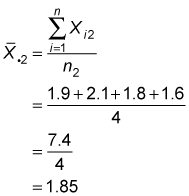 And column 3 (the Voltagenow batteries) as 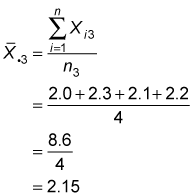 The next step is to subtract the mean of each column from each element within that column, then square the result. The calculations appear in the following table.