The choice of distribution for the hypothesis test based on independent samples is summarized in this table:

If the variances of two populations are equal (or are assumed to be equal) the appropriate test statistic is based on the Student's t-distribution:

Here's what each term means: 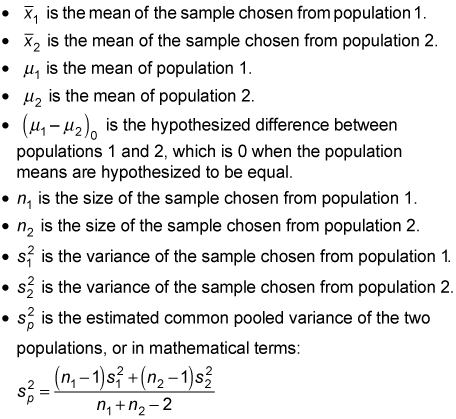 If you are conducting a hypothesis test of two population means with equal population variances, you take the critical values from the Student's t-distribution with n1 + n2 – 2 degrees of freedom, which gives you the following critical values:

As an example, say a marketing company is interested in determining whether men and women are equally likely to buy a new product. The company randomly chooses samples of men and women and asks them to assign a numerical value to their likelihood of buying the product (1 being the least likely, and 10 being the most likely).

The next step is to choose samples from both populations. (The sizes of these samples do not have to be equal.) Suppose that the company chooses samples of 21 men and 21 women. These samples are used to compute the sample mean and sample standard deviation for both men and women.

The alternative hypothesis is

To compute the test statistic, you first calculate the pooled variance: 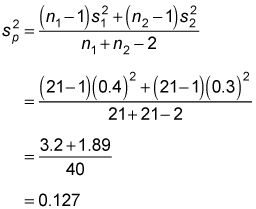 You then substitute this result into the test statistic formula: 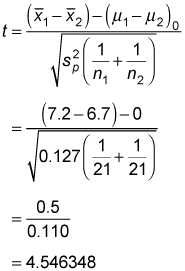 You can find the appropriate critical values from this table (which is an excerpt from the Student's t-table).

These are found as follows. The top row of the Student's t-table lists different values of

and 40 degrees of freedom, you find that the critical values are:

With a two-tailed test, there are actually two alternatives available to the null hypothesis: