When you're testing hypotheses about two population means, where the variances of the two populations aren't equal, and the size of both samples are large (30 or greater), the appropriate test statistic is

This test statistic is based on the standard normal distribution.

Here's a summary of this data:

Because this example requires a two-tailed test, the alternative hypothesis is 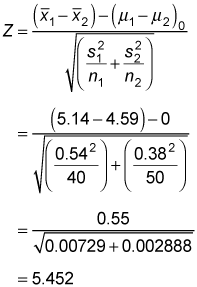 Now you use the standard normal table to find the critical values.

From the table, you find the critical values to be

Because the test statistic (5.452) is greater than the positive critical value (1.96), the null hypothesis

Because this is a two-tailed test, you may reject the null hypothesis in favor of the alternative

(that is, mean spending per customer is greater in the domestic market than the foreign market) or

(that is, mean spending per customer is lower in the domestic market than the foreign market.) Because the test statistic is large and positive, the alternative

is chosen. In other words, mean spending per customer in the domestic market is greater than in the foreign market.