By: LaReine Chabut and
Updated: 03-26-2016
From The Book: Weight Training For Dummies 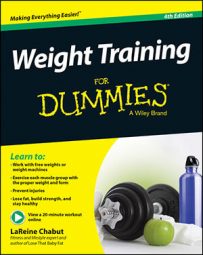 You can perform many movements with both dumbbells and barbells. For example, while sitting on a bench, you can either press a bar overhead (the bench press) or press up two dumbbells (the dumbbell shoulder press). Which is the better option? Actually, both have their benefits.

Dumbbells and barbells both pose a bit more risk than weight machines because you need to stabilize your own body while performing the exercise, instead of relying on the machine to keep your body in the correct position.

Dumbbells come in pairs, and at most health clubs, they’re lined up on a rack from lightest (as light as 1 pound) to heaviest (upward of 180 pounds). By the way, the super-heavy dumbbells are mostly for show, considering that about 0.0000001 percent of the population is capable of lifting them.

Dumbbells come in many shapes and materials. Some have hexagonal ends so they don’t roll around the floor. Others have contoured handles so they fit more comfortably in your hand. Dumbbells are made of shiny chrome and gray steel. Others have rubber coating, so if some yahoo drops them, the weights won’t dig a hole in the floor the size of Australia. 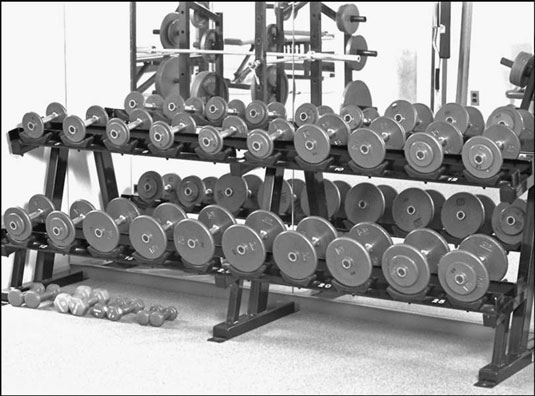 Dumbbells allow each arm to work independently. If one side of your body is stronger than the other — a common phenomenon — this imbalance is apparent when you’re working with dumbbells. Your weaker arm may start wobbling or may poop out sooner than your dominant arm.

Using dumbbells helps correct strength imbalances because each side of your body is forced to carry its own weight, so to speak. By contrast, if you use a bar, your stronger side may simply pick up the slack for your weaker side.

Like dumbbells, barbells, also called bars, come in a variety of designs. The most popular model is a straight bar. At most gyms, these bars weigh 45 pounds and are 6 or 7 feet long. (However, many gyms have bars in a variety of weights, sometimes as light as 15 or 20 pounds. If you’re not sure how much a bar weighs, be sure to check with a staff member.)

Some plates have additional holes cut in either side to make them easier to pick up and carry; the holes function like built-in luggage handles. These plates are a brilliant invention and have probably helped prevent many accidents and backaches.

Be sure to use collars at the gym and at home. Collars, cliplike or screwlike devices, temporarily secure weight plates on the bars. The collars prevent the plates from rattling around or sliding off the bar as you push or pull the barbell. Mirrors have shattered from runaway weight plates. Some health clubs require that you use collars. 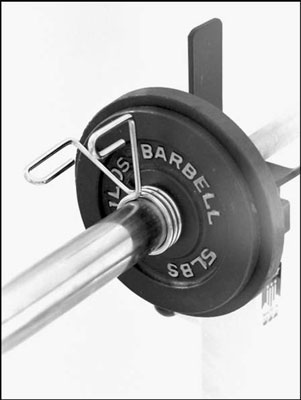 In addition to straight bars, most health clubs and equipment dealers have a number of exotic-looking bars with various twists and bends in them. The most common is a W-shaped bar about 3 feet long, called the EZ-Curl, which is designed to make certain triceps exercises more comfortable.

Some gyms and equipment stores also have an array of straight and EZ-Curl bars with weight plates welded to the ends. These barbells are convenient to use because you don’t have to slide weight plates on and off. If you want to switch from 75 pounds to 85 pounds, you simply put the 75-pounder back on the rack and pick up the 85-pounder. No muss, no fuss.

These welded bars are often shorter and less bulky than the traditional bars, so they’re more comfortable for many arm and shoulder exercises. However, you typically won’t find these fixed-weight barbells weighing more than 150 pounds.

For many barbell exercises — particularly certain chest and leg exercises — you may need a lot more weight than 150 pounds. With traditional bars, you can pile on up to 600 pounds (not that we expect you to do this right away).

Some dumbbell exercises just don’t feel as good as when you use barbells. Any seasoned lifter can tell you that nothing is quite like doing the bench press — the quintessential meat-and-potatoes chest exercise. Many lifters gain a great sense of satisfaction from being able to press so much weight.

Even though the dumbbell chest press is a perfectly good exercise, it may not deliver quite the same amount of satisfaction (probably because you can’t lift as much total weight).

For example, if you can do the dumbbell chest press with a 20-pound dumbbell in each hand, chances are good that you can lift at least a 60-pound barbell because your weaker side always limits you, and it’s more difficult to coordinate moving two separate units, instead of one single barbell.

LaReine Chabut is a distinguished lifestyle and fitness expert, bestselling author, model, and mom. As the on-camera host of MSN’s hit web series Focus on Feeling Better, LaReine helped everyday people across America fit in exercise daily. She is most recognized as the lead instructor of The Firm, a series of popular workout videos and her blog losethatbabyfat.com.