Explore Book Buy On Amazon
The first thing you need to know about inflammation is that it’s not all bad. In fact, inflammation plays an important role in keeping you healthy. Inflammation is the body’s way of protecting itself from harmful bacteria, viruses, and injury. In some cases, though, that system causes the body to turn on itself, attacking healthy cells and organs. In this article, we take a look at the various kinds of inflammation and identify how things can go wrong.

How the immune system responds

The immune system is a complicated association of organs, tissues, and cells that work together to protect the body. Inflammation is part of your body’s response when it feels it’s in danger of infection or further injury.

There are three kinds of immunity:

Inflammation is part of your body’s innate response to invaders. The inflammatory response takes over when harmful bacteria, viruses, toxins, or other elements make their way into your tissues and cause damage. Those damaged cells release chemicals called prostaglandins and histamines, which cause blood vessels to leak fluid into the tissues and create swelling.

The resulting inflammation — characterized by redness, swelling, heat, and pain — serves as a physical barrier against the spread of infection (in the case of illness) or against further injury (which would delay the healing process). Chemical factors released during inflammation ward off or sensitize pain signals, creating a more suitable environment for healing.

Meanwhile, the immune system, sensing danger, sends backup. Various parts of the immune system respond by directing traffic, isolating and killing the invaders, and destroying and clearing out infected cells. The cells communicate with each other through a variety of chemical signals, including cytokines, C-reactive protein, acute-phase proteins, prostaglandins, and more. Understanding this response is helpful for doctors because inflammatory markers indicate where the problem is and how severe it may be. Researchers examine the process to determine what triggers inflammation and find ways to control it — such as through diet — when things go wrong.

The acquired, or adaptive, immune system is the one you develop based on what you do, where you go, and what you’re exposed to. The more bugs and viruses you come in contact with, the more complex your acquired immune system becomes and potentially the more protected.

Through a process called immune response, the immune system calls upon its network — cells, tissues, and organs — to combat illness and infection. Leukocytes, or white blood cells, seek out and destroy infectious organisms and substances. There are two kinds of leukocytes:

Here’s what happens: When your body detects antigens (the foreign substances), a group of cells get together and form a type of cell army to attack the invader. Some of these cells produce antibodies that can lock onto the specific antigens. The antibodies serve as tags, identifying the invader as an enemy and targeting it for destruction.

Some of the antibodies continue to live in your body so they can immediately attack if the same antigen is detected. The next time the antibodies encounter that antigen, they lock on and initiate an inflammatory response.

When inflammation works right, it attacks the irritant — the virus, harmful bacteria, or damaged cells. Sometimes, however, the body kicks into overdrive and launches an offensive on normal, healthy tissue. For example, if you have the autoimmune disorder rheumatoid arthritis, you see some redness and some swelling in the joints, with joint pain and stiffness. This reaction is a sign that your body is trying to attack your joint tissue, which your body mistakenly perceives as unfriendly.

Say your house is being overtaken by mosquitoes. You get some mosquito spray, light a citronella candle, and keep a rolled-up newspaper handy. You’re handling the irritant and the irritant only. Now say you’ve gone a little bit overboard. Instead of a rolled-up newspaper, you take a baseball bat and try to kill that mosquito on the wall. The problem is that the mosquito wasn’t a mosquito at all; it was just a shadow, and now you have a hole in the wall. In the same way, the immune system can overreact to perceived threats and damage the body.

A major underlying factor in the different ways people are affected by inflammation is an imbalance in their acquired immune systems. In a healthy immune system, the helper T cells (those that are part of the immune response and attack) are in balance — one cell to attack blood-borne parasites, the other to attack invaders such as bacteria. As the immune system becomes overstimulated, the helper cells find themselves in a self-perpetuating imbalance, causing the helper cells to attack the body. As long as whatever is causing the inflammation is still present, the imbalance remains.

Inflammation can also go on too long. The innate and the acquired immune systems communicate with each other through sensors and signals, which tell the body when to release certain chemicals and proteins to activate the inflammation guard. The signals are supposed to tell the inflammation when to stop as well. That doesn’t always happen. Some people have elevated levels of C-reactive protein, an inflammatory marker that leaves the body in defensive mode, always ready to attack. When that happens, your body begins a steady downward spiral leading to disease.

Creating inflammation isn’t something your body does without effort — it takes energy, which causes fatigue and creates free radicals, molecules that cause cell damage. Thanks to all the things you’re exposed to, cells related to the inflammatory response have to become pretty strong, which means that when they attack, they do so with force. That force can cause damage the longer those cells are active.

Inflammation also causes oxidative stress and mitochondrial damage. Mitochondria are the powerhouse of a person’s cells that are needed for energy and for the system to function at its best. Besides free radical damage, inflammation can cause advanced glycation end products (AGEs) and uric acid crystals and can oxidize your bad cholesterol and other effects that unchecked can lead to chronic disease.

Differentiating between acute and chronic inflammation

Inflammation may be acute or chronic. The biggest difference between the two is time: Some researchers describe inflammation as high-grade or low-grade, depending on the severity of inflammation and the levels of inflammatory markers such as high sensitivity C-reactive protein (hs-CRP), fibrinogen, globulins (like IgG and IgA), and proinflammatory cytokines. Low-grade inflammation often leads to chronic disease, such as atherosclerosis (hardened arteries), diabetes, cancer, arthritis, multiple sclerosis, irritable bowel syndrome, high blood pressure, and lupus.

One of the first and best ways to determine whether you’re experiencing low-grade inflammation is to have some bloodwork done. A healthcare professional can test your highly sensitive-CRP (hs-CRP) levels, along with other specific tests for inflammatory markers and cytokines, such as lipoprotein A2 (LPA2) and immunoglobulins (IgA). According to the American Heart Association, an hs-CRP test can help determine a person’s risk for heart disease, stroke, and other cardiac issues.

For you to remain healthy, your immune system must remain healthy and in balance. Getting the right kinds and amounts of proteins, fats, vitamins, and other nutrients is key in getting and staying healthy. Eating right gives your body the building blocks it needs to build cells and create chemicals, and the digestive system plays a key role in the immune system.

Breaking down food and dealing with the pieces

Digestion involves mechanical actions — the chewing and grinding of the food — as well as chemical processes, in which enzymes break down the food into tiny molecules. Your body puts these molecules through a selection process, keeping the useful molecules as raw materials for building cells, hormones, and so on; filtering out what it can’t use; and neutralizing and removing harmful substances.

Recognizing the digestive tract as part of the immune system

A major forgotten part of the immune system is the digestive tract. In fact, 80 percent of your immune system is found there. The digestive tract contains the gut associated lymphoid tissue (GALT), a type of tissue that monitors and protects the body against pathogens (germs). There is a high concentration of GALT in the small intestine, where your food gets absorbed.

Due to oral tolerance, the GALT doesn’t respond to most foods you eat as foreign invaders. That’s why you don’t mount an immune system response to everything you eat. However, the GALT is the same part of the immune system that overreacts to food and mediates the hyperreactive immune response in food allergies, where the food is seen as an invader.

The intestines also offer a safe haven for beneficial bacteria, called the gut microbiome, which aid in digestion and occupy prime real estate so other, harmful microorganisms can’t move in. Dysbiosis is an imbalance of good and bad bacteria in the gut. Because many of its symptoms seem to be normal reactions to some foods, many people shrug off the condition. But if left untreated, it can turn into leaky gut syndrome, a major cause of disease.

Leaky gut syndrome is part of the mechanism that contributes to inflammation in the gastrointestinal (GI) tract and thus the rest of the body. Inflammation in the intestines disrupts the tight junctions, the glue that holds the cells of the intestines together in a self-contained tube. Most molecules are too big to fit through these junctions, so the only way for them to escape the intestines and enter the blood is to be ferried through the intestinal cells, from one side to the other. With inflammation, the junctions become too “leaky” and let things such as large food particles and bacteria out into the rest of the body, where the immune system can attack them (see the figure). In this way, leaky gut syndrome, also known as intestinal hyperpermeability, contributes to autoimmune disorders, joint pains, and food allergies and sensitivities, neurodegenerative disease and most chronic disease. 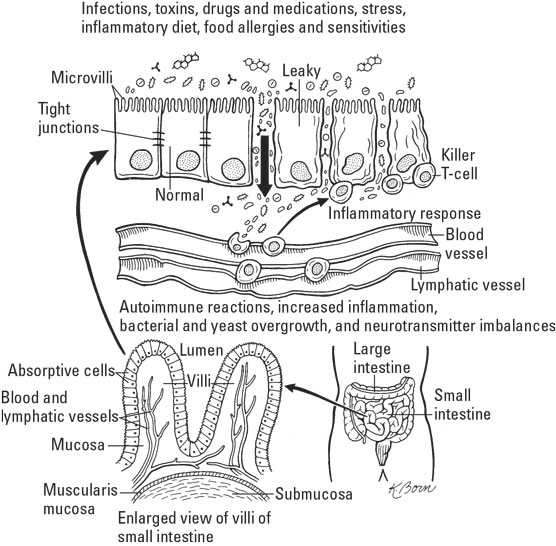