Explore Book Buy On Amazon
Psychologists have been trying to pin down the concept of intelligence for a long time. People differ in their abilities to solve problems, learn, think logically, use language well, understand and acquire concepts, deal with abstractions, integrate ideas, attain goals, and so on.

This list of human abilities represents some of the ideas of what intelligence actually is; these abilities are the stuff of intelligence. For a more concrete definition, intelligence can be understood as a collection of cognitive abilities that allows a person to learn from experience, adapt successfully to the world, and go beyond information presented in the environment.

Acting intelligently is probably the most grand cognitive process of the human mind. After all, managing information and the various components of attention and remembering things ought to produce something useful, right? You can view intelligence as the collective output of human cognition that results in an ability to achieve goals, adapt, and function in the world. This is intelligent behavior.

The factors of intelligence

Sure, intelligence is a collection of cognitive abilities, but a unifying construct called “intelligence” that can be measured and quantified must exist, right? Psychologists think so, and they’ve been working tirelessly to test and measure intelligence for a long time. As part of this work, psychologists have developed intelligence tests and worked with militaries, schools, and corporations, trying to sort individual differences in intelligence in the service of job selection, academic honors, and promotions. From all this testing has emerged the concept of “g” as a general and measurable intelligence factor.

The g-factor is comprised of subcomponents known as s-factors. Together, the g- and s-factors comprise what is called the two-factor theory of intelligence:

So, intelligence according to the psychometric theory is a score on an intelligence test. How can this be? Each test is made up of subtests, and typically, people who score high on one test do well on the other tests, too. This reveals a relationship among the individual abilities as measured by the subtests; the general intelligence concept underlies that relationship.

Psychologists continue to divide general intelligence into specific factors. The Cattell-Horn-Carroll Theory of Cognitive Abilities (CHC Theory) proposes that “g” is comprised of multiple cognitive abilities that when taken as a whole produce “g.” The individual contributors to CHC theory (Raymond Cattell, John Horn, and John Carroll) produced a model of general intelligence consisting of ten strata. They are as follows: Researchers continue to work with the CHC model and have developed research programs looking into adding to the ten strata. Many professionals believe that sensory and motor abilities need to be more fully included in this theory, and researchers are looking at “tentative” factors such as tactile abilities (touch), kinesthetic ability (movement), psychomotor ability and speed, and olfactory ability (sense of smell). Wait a minute, you mean I can be a smart smeller? Only the nose knows!

Many intelligence researchers and practitioners have accepted CHC as a triumph of psychological science and the consensus model of psychometric conceptions of intelligence. It is, however, a working model, and many intelligence investigators and theorists consider CHC theory as a strong beginning but not the final word on intelligence.

American psychologist Robert Sternberg developed the Theory of Successful Intelligence in part to address the street smarts controversy, which holds that many intelligent people may be smart when it comes to academics or the classroom but lack common sense in real life or practical matters.

A cultural myth claims that Albert Einstein, unquestionably gifted in mathematics and physics, couldn’t tie his own shoes. I don’t know if this is true or not, but Sternberg seems to agree that an important aspect of being intelligent is possessing a good level of common sense or practical intelligence. The three intelligence components of his theory are as follows:

Have you ever wondered what made Michael Jordan such a good basketball player? What about Mozart's musical ability? He wrote entire operas in one sitting without editing. That’s pretty impressive! According to American psychologist Howard Gardener, each of these men display a specific type of intelligence.

Gardener generated a theory known as multiple intelligences from observing extremely talented and gifted people. He came up with seven types of intelligence that are typically left out of conventional theories about intelligence:

Any one of us can have varying degrees of Gardener’s intelligences. I may be one heck of a baseball player and a math whiz, but I may be unable to carry a conversation, get lost walking home from the grocery, and have no idea how I feel about all that.

Making the intelligence grade — on a curve

Psychologists like to measure stuff, especially stuff related to human behavior and thought processes, like cognitive abilities. Measuring and documenting individual differences is at the core of applied psychological science.

Whether you ascribe to CHC, Sternberg’s model, or the concept of multiple intelligences, don’t forget the concept of average. Intelligence is considered to exist in the human population along what is called a normal distribution. A normal distribution is essentially a statistical concept that relates to the ultimate range of any particular trait or psychological phenomenon across a population.

Individuals vary in how intelligent they are. A normal distribution (see the following figure) is established by assuming that if the full population took an intelligence test, most people would center around average scores with some variation — from slightly less than average to slightly higher than average.

A normal distribution is also referred to as a bell curve because it looks like a bell with a bulky center and flattening right and left ends. Most people are somewhere in the range of average intelligence. Increasingly fewer people are at intelligence levels that are closer to the highest and lowest ends of the spectrum. 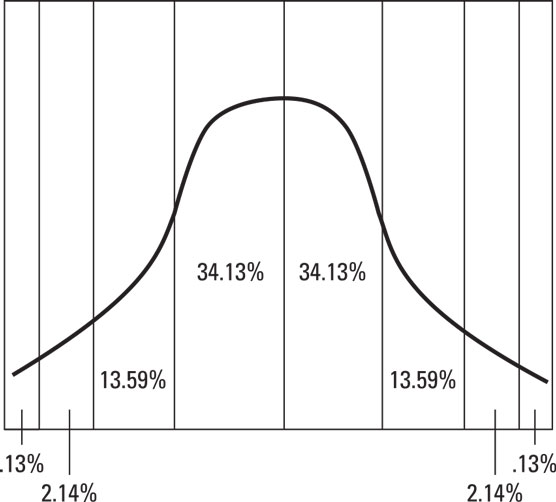 Einstein was a genius, right? So what exactly is a genius?

Psychologists typically refer to super-smart people as intellectually gifted rather than using the term genius. But there is no uniform cutoff score on an intelligence test to determine giftedness. An average standard intelligence score is 100 and, generally speaking, any score above 120 is considered superior. Giftedness is granted to people in the top 1 to 3 percent of the population. That is, out of 100 people, only one, two, or three are considered gifted.

Many psychologists are wary of defining giftedness in such numerical and statistical terms and warn that cultural and societal context must be factored in. Could one culture’s genius be another culture’s madman? I’m not sure it’s that dramatic, but it is important to consider that giftedness is multifaceted and not so easily tied to a cutoff score.

Numerous attempts have been made to pin down a definition of intellectual giftedness. Robert Sternberg proposed that giftedness is more than superior skills related to information processing and analysis; it also includes superior ability to capitalize on and learn from one’s experiences to quickly solve future problems and automatize problem solving. He proposed that gifted people are especially skilled at adapting to and selecting optimal environments in a way that goes beyond basic information processing and what is considered general intelligence or “g.”

In short, think of any of your favorite fictional detectives, like Sherlock Holmes, Miss Marple, or Lieutenant Columbo, and you'll find someone gifted with superior metacognitive skills.