The Organization of the Brain

Explore Book Buy On Amazon
If you open up the skull and look at the brain, one of the first things you’ll like notice is that anatomically, the “one” brain is really two halves called hemispheres. These two halves are connected by a large bundle of nerve fibers called the corpus collosum.

Structurally, there are three main divisions of the brain: forebrain, midbrain, and hindbrain. Each of these divisions consists of many substructures that are involved in various behaviors and activity.

The brain is a complex, integrated system. All of its components work together to produce the complexity of human behavior. The concept of localization refers to the idea that there are specific parts of the brain for specific components of behaviors. Various parts work together to produce vision, hearing, speech, and so forth. Neurological techniques such as post-mortem brain examination, CT (co-axial tomography) scans, MRI (magnetic resonance imaging) scans, and PET (positron-emission tomography) scans have been used to identify and explore these systems.

The human forebrain is involved in a wide range of mental processes, including the sensing, perceiving, and processing of information. It is also involved in thinking, problem solving, organizing, and language functions.

The figure shows the four major divisions of the cerebral cortex and their corresponding functions: 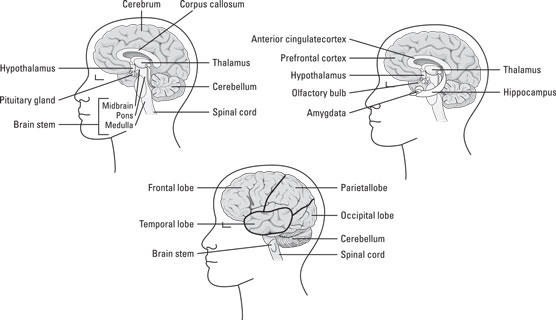 The lobes of the cerebral cortex.

The midbrain is involved in the auditory and visual processes and in motor control. The midbrain consists of the following divisions and their respective areas of responsibility:

The hindbrain is involved in the autonomic functions of the body such as heart rate and breathing as well as the coordination of movement. The hindbrain includes two divisions with assigned duties:

Tiptoeing back and forth from the periphery

There’s that toe again! Of the two divisions of the body’s nervous system, think of the peripheral nervous system (PNS) as a system of connections that make it possible for the brain and spinal cord to communicate with the rest of the body. Two sets of nerves are involved: