Biological Psychology: The Role of Cells and Chemicals

Explore Book Buy On Amazon
Besides the brain itself, cells and chemicals are some of the major components of biological psychology. At the cellular level of brain anatomy is what many brain scientists consider to be the fundamental unit of the brain and the nervous system: the neuron, a specialized cell that provides the foundation for brain functioning, which is communication among nerve cells.

Actually, there is another important type of cell in the brain: the glial cells. Glial cells provide the basic structure to the nervous system and nourish the neurons. But neurons are the star of the brain show according to most scientists.

A neuron is considered the information cell; it’s involved in the processing and storage of information. Neurons contain the following parts:

The action in the brain happens when a neuron is activated and sends electrochemical signals to other neurons. Neurons become activated by input from other neurons, which in turn impacts the other neurons in a given network. Simply put, when information from the environment (or inside the brain itself from other neurons) comes into the brain through the sensory organs and activates a particular neuron (or, more often, a set of neurons), an action potential is created.

Action potentials are the movement of electrochemical energy through a neuron toward its terminal button, toward other neurons. Something called the all-or-none law states that neurons are either “on” or “off”; they are either firing an action potential or not. After a neuron is activated, it fires. If it’s not activated: no action, no fire!

Some people consider the firing of a neuron (the action potential) to be an electrical process; others say it’s a chemical process. In essence, however, it’s both. The action potential consists of electrical energy that’s created and activated by the exchange of positive and negative chemical ions between the inside and the outside of the neuron. It’s electrochemical.

When a neuron is not firing, it is considered to be in the state of a resting potential and its electrical charge is more negative on the inside relative to the outside. There are more negatively charged ions inside than outside. But when a neuron receives a signal from another neuron, gates in the cell membrane (its covering) open and positive ions rush into the negatively charged inside of the cell. Chemistry and physics point out that positive charges move toward negative charges; they attract! So as the inside of the cell spikes to the positive, the action potential is created and the neuron fires! In many ways, the action potential is an electrical disturbance in the axon that travels along the axon, like the fire moves down a lit fuse of a firecracker.

When the action potential occurs, the cell cannot fire again for a short period of time. During this refractory period, small pumps in the cell membrane work to reset the neuron by moving positive ions back out of the cell, returning the chemical balance of the neuron to its original state to prepare for another round of action.

The idea that all of human psychology can be reduced to biology is known as biological reductionism. This idea seems to insult our closely guarded and esteemed sense of free will, self-awareness, and consciousness. How can all this complex stuff going on inside the mind be reduced to a hunk of flesh resting between the ears?

The following discussion covers how neurons communicate with each other by sending signals from one neuron to another in a process called synaptic transmission.

How neurons communicate: networking and crossing the divide

As an action potential speeds through a neuron toward its terminal button, how does it propagate that signal to other neurons in the network? Before I can answer, you need to know that neurons don’t actually connect to each other in a physical sense. There are gaps between them known as synapse, spaces between axon terminals of one neuron (the neuron sending the signal) and the dendrites of the next neuron (the neuron receiving the signal); this is where inter-neuronal communication happens through chemical messengers called neurotransmitters. The following figure shows a neuron and a synapse. Although they are only millionths of an inch apart, the sending neuron throws its “message in a bottle” into the sea-napse, where it drifts to the other shore (the receiving dendrite). The message says, “Please hear me; please fire!” Dramatic stuff! 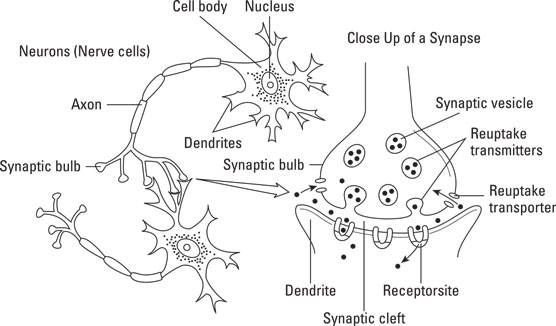 Neurotransmitters are stored in the axon of the sending cell. An action potential stimulates their release into the synapse. They travel (actually drift) to a receiving neuron in which specialized docks known as receptor sites are present. Different shaped neurotransmitters have different docks.

Following the docking process, neurotransmitters are either broken down by enzymes or reabsorbed by the sending neurons in a process called reuptake. These two processes clear neurotransmitters from the synapse after they have done their job (enough, already!). This is critical to prepare the cells for the next signal. Neurotransmitter manipulation is a primary mechanism of action for most psychiatric medications.

Scientists have discovered more than 100 neurotransmitters in the human brain. Many, including the following, play a major role:

How neurons are connected: branching out

An estimated 86 billion neurons live in the human brain and form trillions of connections among themselves. So, you can think of the brain as a massive collection of nodes in a well-connected network. Just exactly how information is kept and processed in the brain remains the focus of incredible amounts of neuroscience research, but here’s what scientists do know.

The brain is a “massively parallel” information-processing system. If each neuron was connected to only one other neuron, the neuron system would be considered “massively serial.” Compared to electronic signals, neural signals travel very slowly (like 5–100 mph), so it is efficient to do many things at once — called parallel processing. Think of it like finding a person who is lost in a large national park. The search party probably doesn’t stay together and follow each other on the same path (serial processing); instead, they “branch out” (parallel processing) to cover more ground in the same amount of time. Likewise, the brain, with its billions of neurons and trillions of connections, uses the branching-out method to process, store, and find information among its cells and cell clusters.

Not every neuron is connected to every other neuron, but neurons are connected to multiple others that form clusters or networks involved in particular psychological processes and behaviors. For example, if seeing a red ball activates neurons #3, 4, 192, X, A, and 56, then the network for “seeing a red ball” would be called 3-4-192-X-A-56. Neuroscience researchers are working hard to map the brain and its networks in order to connect cell clusters to respective mental functions and behavior. The International Consortium for Brain Mapping (ICBM) is one such group of scientists that is dedicated to this endeavor.

Have you ever scratched your nose and noticed that your foot stopped itching? Okay, well, that’s a slight stretch, but there is something called phantom limb syndrome in which people who have lost a limb (an arm or leg for example) continue to report feeling sensations from that limb such as pain, cold, touch, and so on. How can this be? The limb is gone so where are the sensations coming from?

In his book, Half a Brain Is Enough: The Story of Nico, Dr. Antonio Battro tells the story of a boy named Nico who has a very significant portion of his brain surgically removed to control seizure activity (a drastic but sometimes necessary surgery for individuals with intractable seizures). However, after having that large portion of his brain removed, Nico remains relatively normal and maintains a fair amount of brain functioning — as if the brain tissue had not been removed. Why does Nico remain relatively unimpaired while working with half a brain?

Both phantom limb and Nico’s brain demonstrate what brain scientists refer to as neuroplasticity, which is the notion that the brain’s neural networks and connections continually reorganize. At one point in time, scientists believed that the brain’s organization was “fixed,” but this is simply not the case. The brain can change its size and connections throughout a person’s lifetime.

The ability for the brain to update itself in response to new stimulation and input represents the neurobiological foundation of learning. In phantom limb syndrome it was found that the neural networks devoted to the lost limb (arm, leg, and so on) had been co-opted by neurons and networks proximal to it such as neurons associated with sensation in the in nearby body parts. So, when the face had a sensation, the neurons that were previously associated with the lost limb were being stimulated, and other parts of the brain interpreted the sensations as coming from the limb.

In Nico’s case, the functions performed by the lost brain cells from surgical removal were taken over by neighboring or other cells and networks. Other parts of the brain essentially learned how to do the functions once performed by the lost cells. In both cases, phantom limb and Nico, the brain essentially rewired itself in response to new inputs and learning experiences.

Neuroplasticity is good news for people who lose brain tissue through trauma or disease. But what about growing new brain cells? After all, new skin cells grow after a cut. Does this happen in the brain?

For many years, scientists believed that it was not possible to grow new neurons or brain cells. However, research has shown that neurogenesis (regeneration of nerve cells) is possible in specific regions of the brain, particularly the lateral ventricles and the hippocampus. More research is being conducted to see if this process is happening in other parts of the brain as well. If neurogenesis is found to be more widespread or possible in other brain areas or if scientists can find a way to stimulate the process, manipulate it, or otherwise impact it, then there may be a great ray of sunshine for people who now suffer from diseases or trauma such as Alzheimer’s, stroke, traumatic brain injury, or spinal cord injury. However, the science and research is very preliminary in this area and much more work needs to be done before such a thing is possible.

Because everything people do involves the brain, one might wonder what happens when some part of the brain gets damaged? The behavior and mental processes associated with the damaged portion of the brain are adversely affected or altered. Clinical neuropsychologists are particularly interested in the behavioral and mental consequences of brain injuries.

The brain can be damaged in numerous ways: