Give Your Mind Some Peace for Mental Health Awareness Month

Explore Book Buy On Amazon
With household names like Simone Biles and Justin Bieber going public about their struggles with anxiety and depression in recent years, mental health is finally becoming less taboo. It wasn’t long ago that any deviation from the norm was treated like a shameful secret: mental health conditions were ignored, waved away, or handled in private — and often inhumane — ways (think lobotomies).

The ongoing lack of visibility into these struggles served to perpetuate the myth that mental health issues were pretty rare — and that the few people who did struggle were somehow to blame for their condition. 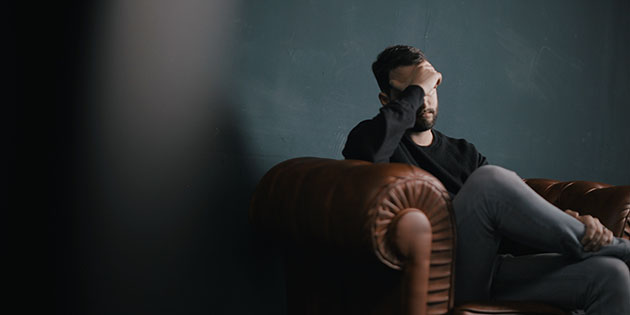 Today, we know mental health conditions are actually incredibly common: As of 2020, 1 in 5 U.S. adults reported experiencing a mental illness, according to the National Alliance on Mental Illness (NAMI). And that number is growing: the stress, fear, grief, isolation, and uncertainty of a global pandemic has led to an increase in mental health issues — particularly among young adults — according to the CDC.

Of course, that’s a conservative picture: In cultures, professions, and communities where mental illness stigma remains alive and well, addressing your own struggles has consequences — anything from social ostracization to losing your job.

Meanwhile, a lack of access to affordable health care and unbiased information creates additional barriers for those most in need of support. And, when left untreated and unacknowledged, one person’s poor mental health can create a ripple effect that impacts their loved ones. When we look at the toll that untreated mental illness takes on our society, it’s safe to assume we’re only seeing the tip of the iceberg.

It’s a complex, sensitive, and crucial issue — which is why awareness remains so important.

What is a mental illness?

According to NAMI, mental illness refers to a wide range of conditions that affect “a person's thinking, feeling, behavior or mood.” Waking up on the wrong side of the bed, it is not — while symptoms can ebb and flow, mental illness is partially defined by the impact it has on day-to-day functioning and personal relationships.

Some of the most common types of mental illness include:

Anxiety disorders can manifest in a number of ways: from racing thoughts or risk-averse behavior to an upset stomach. Anxiety disorders are the most common — and the most treatable — form of mental illness, impacting more than 40 million Americans over 18. They include:

While anyone can experience a mood swing, the highs and lows are more severe, persistent, and disruptive for those living with mood disorders. There are a variety of mood disorders, each with their own diagnostic criteria and symptoms. A person with bipolar disorder may experience drastic swings between high moods (mania) and low moods (depression), while a person with major depressive disorder experiences the lows — changes in sleep and appetite, persistent feelings of worthlessness or hopelessness, lack of motivation, inability to focus or make decisions, and feelings of emptiness — without the highs.

It’s not easy living with a mental health condition, but there are several options to make life more manageable. Some of the most popular include:

Cognitive behavioral therapy (CBT) teaches common sense principles that help people break out of unhelpful thought patterns and behaviors. It’s thought to be the most effective form of therapy for a number of conditions, including anxiety, addiction, depression, eating disorders, social anxiety, and personality disorders.

Dialectical behavioral therapy (DBT) is a form of CBT. While DBT also helps people recognize unhelpful thinking and behavioral patterns, the primary teaching is mindfulness techniques that help patients regulate their emotions in a world full of suffering. It works best for people who have trouble controlling their responses to strong emotions.

Mindfulness is more than the buzzword du jour — it’s a great way to manage anxiety, addiction, and even everyday stress. Mindfulness is the practice of being aware of — and accepting — the present moment. Meditation is one of many ways to cultivate this skill.

When all else fails, medication could be the missing link. A psychiatrist can help determine if psychiatric drugs would be a beneficial form of treatment.