How to Write and Handle the Pentest Report

Explore Book Buy On Amazon
For the PenTest+ certification exam, you are expected to have an understanding of the basics of pentest report writing, including familiarity with the different sections of the report, what goes into the report, and how to securely store and transmit the report.

At the completion of a pentest, the pentest report is a valuable asset for a business. Not only will the report contain a list of vulnerabilities that need to be fixed and remediation steps to follow to reduce the vulnerabilities, but it will also discuss the methodology that was followed for the current engagement and can act as a guide for future penetration tests.

Before jumping into the structure of the report, let’s discuss two important concepts of pentest reports: normalization of data and risk appetite.

You also should normalize results so that they are all based on the same scale. For example, some testing tools may use a scale from 1 to 10, while others may use a scale of 1 to 8. You will need to convert the results based on a scale of 1 to 8 to be out of 10 so that all results are normalized and based on the same scale. Also, some tools may report the value of 1 being bad, while 10 is good, while another tool may report 1 as being a good value and 10 is a bad value. In this example, you will need to normalize the data by reversing the scale so that all the data can be plotted on the same chart in the pentest report.

It is important to remember that the purpose of the penetration test is to report on the findings of the pentest and give remediation steps on how to better secure the environment and reduce the risk to attack. The pentest report is a written report of findings and remediation steps that should include the following sections as outlined here.

Title page and table of contents

After the title page, the report should include a table of contents that specifies the page references for each of the other parts of the report.

The methodology section of the report outlines the types of testing performed during the penetration test, the steps taken during each phase, and how the attacks were carried out. The methodology section also discusses the process used to identify and rate the risks for each vulnerability found and what tools were used by the pentesters.

You can then calculate risk with the following formula:

You can then display a graphic outlining the scores for low risk (in my example it will be scores from 1 to 3), medium risk (scores 4 to 6), and high or critical risk (scores 7 to 9) as shown. 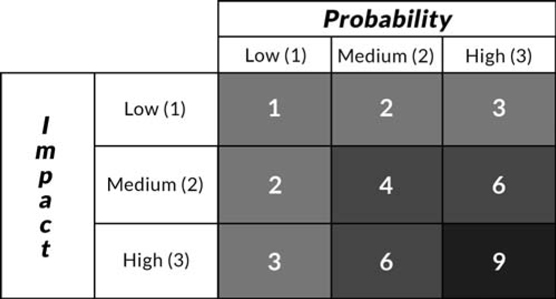 Again, this is just an example. You can go with a 4- or 5-number scale for each category of probability and impact, which will give you a bit more variance in the risk rating scores. It is important to show how the risk scores are calculated, and use graphics in your report to help the reader relate to the results. Having a legend showing that low is green, medium is orange, and high or critical is red is also important, as you can use those colors in your findings to draw out critical vulnerabilities.

Description: While assessing passwords on the network, it was found that many user accounts are using weak passwords made up of words found in the dictionary. These passwords were easily cracked by the John the Ripper tool.

Remediation: It is recommended that password policies are configured to enforce complex passwords, lock out an account after three failed log-on attempts, keep a password history of 12 passwords, and require passwords to change every 60 days.

Secure handling and disposition of reports

The penetration testing report contains a lot of sensitive information about an organization, such as Internet Protocol (IP) addresses of different systems, vulnerabilities that exist for the different systems, and the steps taken to exploit those vulnerabilities. This information is worth gold for a hacker, so you want to be sure to protect and control access to the report.

The first point to make about keeping the report secure is that you must store penetration testing reports in an encrypted format to ensure that the information is kept confidential, and there should be a limited number of people who have access to the report. Any hard copies of the report should be kept in a secure location for an agreed-upon time.

For the PenTest+ certification exam, remember that the pentest report should always be encrypted, both in storage and in transit.

The second point to remember about keeping the report secure is how long the report is stored. The original pentest agreement should specify how long the pentesting organization has a copy of the report in its possession — and it must be stored in a secure location.

The purpose for the pentesting organization to hold on to a copy of the report is to be able to answer questions from the customer related to the penetration test. Once the report is no longer needed, the pentest company should securely delete the digital copies and shred the hard copies.