Explore Book Buy On Amazon
Take a look at some penetration testing terminology you need to be familiar with for the CompTIA PenTest+ certification exam.

The CompTIA PenTest+ certification objectives reference some key terms in regard to the different types of assessments that can be performed. The following are some common types of pentest assessments:

You can follow several different strategies when performing a penetration test. You can go with a black box text, a white box test, or a gray box test:

The purpose of penetration testing is to simulate attacks that could occur in real life. A big part of information security — and something all security professionals should be aware of — is who you are protecting against. Who would attack your network or website?

Before we look at the types of hackers and threat models, it is important to understand the different levels of hacking capabilities for each type of hacker, or threat actor, and the different reasons of intent for hacking.

The capabilities of a hacker will vary depending on the type of threat actor the hacker is and the types of attacks being performed. Some attacks are basic in nature, so you may find that all types of hackers can perform these attacks, while more sophisticated attacks are performed by hackers with more detailed knowledge of the underlining technologies being hacked, their vulnerabilities, and how to exploit those vulnerabilities.

A hacker may be motivated to hack for many reasons, such as for financial gain (for example, hacking into bank accounts or selling sensitive data that was obtained in the hack) or for the fame or notoriety that is earned by hacking into a big-name company. A hacker may also be motivated by a personal cause or a group cause, as is the case with terrorists or activists.

A threat actor is a person or entity that causes the threat against your assets. When it comes to hacking, you should be aware of some common threat actors: 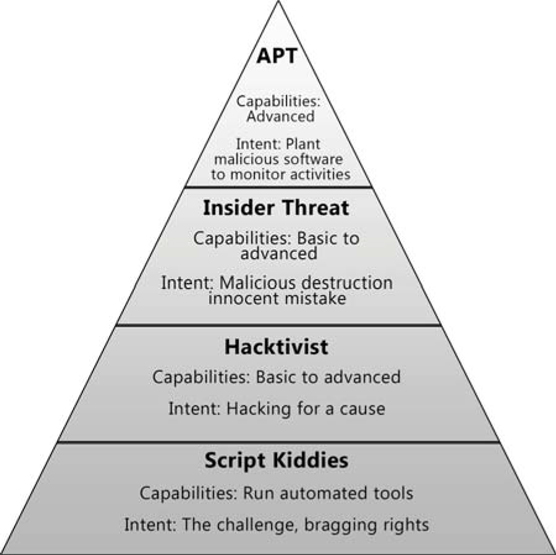 Penetration testing typically involves an exercise known as threat modeling. Threat modeling refers to the act of documenting company assets and then defining the types of attacks or threats against those assets. The threats are then assigned a likelihood (the chances the attack will happen) and impact (how serious the result of the attack if successful) so that the threats can be prioritized. Based on the priority of the threats, security professionals put security controls in place to prevent those threats from occurring or to minimize the impact.