Explore Book Buy On Amazon
Active information gathering for a pentest involves polling the target systems to find out about the systems that are up and running, the ports that are open, and the software being used. This involves communicating with the systems and potentially being detected.

Many of the active information gathering techniques involve scanning target systems to find out things like the operating system that is running and the services running on the system.

Domain name system (DNS) profiling involves sending queries to DNS servers to retrieve information on the systems that might exist within the company, such as a mail server or a web server. Keep in mind that in passive information gathering you were able to obtain the DNS server information for a company by doing a Whois lookup. The next step is to send queries to those servers to find out what DNS records exist.

You can use a number of tools to perform DNS profiling. The two most common are the commands nslookup and dig.

nslookup is a TCP/IP command in Windows and Linux that allows you to query DNS servers for different types of DNS records. You can use nslookup as a command or as an interactive prompt where you type nslookup commands into the prompt. Here is an example of using nslookup as a regular command to retrieve the internet protocol (IP) address of a host: 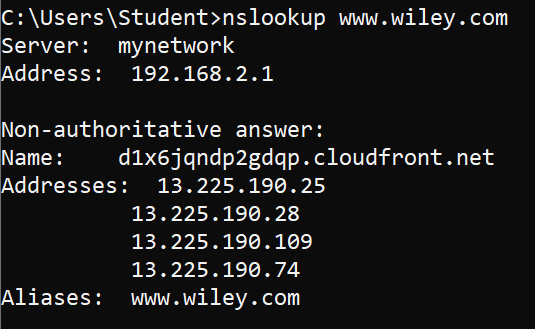 Using nslookup to resolve an FQDN to an IP address

With nslookup you can also do things like specify you want to see the email servers for a company by setting the type of query to MX (mail exchange) records. To do this, use the following commands:

In the following figure, you can see the output of the command. It looks like wiley.com has four mail servers. When performing the pentest, you would document the four FQDNs of the mail servers and then resolve those to IP addresses by using nslookup .

As one final example, you can try to retrieve all of the DNS records for a particular company by doing a DNS zone transfer. DNS zone transfers should be controlled by the server administrators, so if you are successful, you definitely want to make a note of it and add it to your remediation list in the pentest report.

To attempt a zone transfer from Windows using nslookup, use these commands:

Keep in mind you would have retrieved the DNS server information from the Whois lookup you performed during your passive information gathering earlier. Pretending the DNS server is 192.168.1.1 for wiley.com (which it is not), you could use the following commands to do a zone transfer:

dig, which is short for Domain Information Gopher, is a command in Linux used to perform DNS profiling. I like the output of dig a bit better than the output of nslookup because I think it's easier to read.

To find out the IP address of www.wiley.com, type the following command on a Kali Linux machine:

Notice in this figure that the question section is seeking information about the IP address of www.wiley.com, and the answer section is listing the four IP addresses associated with it. 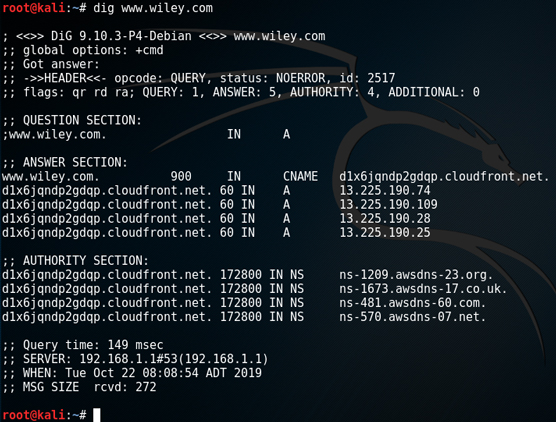 What I like about dig as a command is that you can ask for the short version of the output by adding +short to the command. For example:

Notice that the output in the following figure is much cleaner than the output shown in the preceding figure, and the IP addresses stand out right away.

If you want to use dig to retrieve specific records, such as MX records to find out the email servers for a company, you could use the following command:

You could also clean up the output by adding +short to that command:

This figure displays the output of using dig to find the MX records. 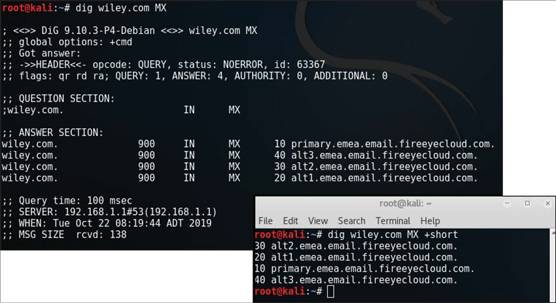 If you want to do a zone transfer with dig to attempt to retrieve all of the DNS records that exist, you could use the following dig command:

You may notice that you do get a few records that identify the DNS servers for the company (NS) and also a few host records (A); however, you may also notice that at the bottom of the output it says “Transfer Failed.” This is because the server administrators for that company are blocking full zone transfers as it exposes too much information to the hacker. If you are testing a company and zone transfers are not refused, you want to be sure to document that in your pentest report.

For the PenTest+ certification exam, know that dig and nslookup are two tools that can be used to perform DNS profiling to help identify hosts that exist within an organization.