By: Tara Rodden Robinson and
Updated: 03-12-2021
From The Book: Genetics For Dummies, 3rd Edition

Explore Book Buy On Amazon
Genetics is a complex field with lots of details to keep straight. But when you get a handle on some key terms and concepts, including the structure of DNA and the laws of inheritance, you can start putting the pieces together for a better understanding of genetics.

The Scientific Language of Genetics

From chromosomes to DNA to dominant and recessive alleles, learning the language of genetics is equivalent to learning the subject itself. The following key terms are guaranteed to appear frequently in your study of all things genetic:

The Structure of the Cell Nucleus and Its Chromosomes

If you could open the nucleus of a cell and peek inside, you’d find chromosomes — the strands of DNA where genes reside. This figure helps you see how all chromosomes, DNA, and genes relate to one another. 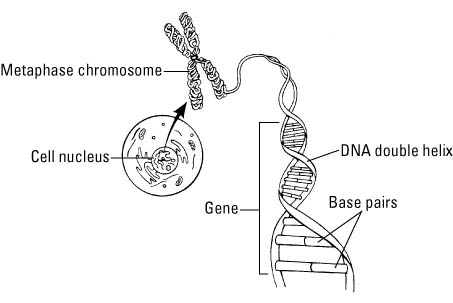 Genetic inheritance boils down to three simple concepts put forth by Gregor Mendel, a humble monk and part-time scientist who founded the entire discipline of genetics. However, it is important to note that there are always exceptions to these rules. The three laws of inheritance include:

The Structure of DNA

DNA is made up of long chains of nucleotides. To make a complete DNA molecule, single nucleotides join to make chains that come together as matched pairs and form long double strands. Each nucleotide is composed of the following:

Nucleotides are joined together by phosphodiester bonds. Nucleotide chains are antiparallel and complementary. 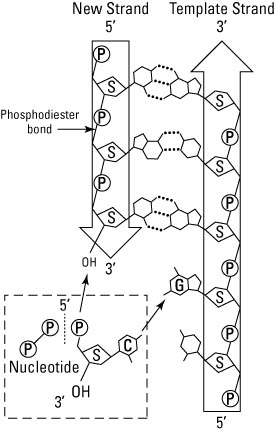 Uncover Inheritance Based on Genotype and Phenotype Ratios

Every genetics problem, from those on an exam to one that determines what coat color your dog’s puppies may have, can be solved in the same manner. Here’s a simple approach to any genetics problem:

When solving genetics problems, it pays to know what patterns to look for. The parent genotypes and offspring phenotypic ratios in this table can help you figure out what kind of inheritance is at work.

The Central Dogma of Genetics

The Central Dogma of Genetics is that the genetic information stored in genes is first transcribed into messenger RNA (mRNA) and is then translated into protein. Transcription occurs in the nucleus of a cell and uses the sequence of a gene to create an mRNA transcript. Each gene is identified by transcription machinery and includes its regulatory sequences (promoter, enhancers, silencers), exons (the sequences that code for the protein product), introns (the intervening sequences located between the exons that do not code for protein product), and the sequences that signal the end of the gene (terminator sequence).

After the mRNA is created, a cap is added to one end, a poly-A tail is added to the other end, and the introns are removed by splicing. The mRNA then moves out of the nucleus, where it is then translated. During translation, the mRNA sequence is read in 3-base pair segments called codons. Each 3-base pair codon codes for a specific amino acid (the building blocks of protein). The result of translation is a string of amino acids that are joined to create the final protein product (a polypeptide chain), which is then folded and sometimes modified to make the active form. 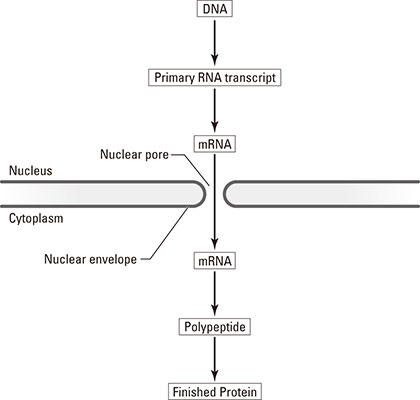