How Biologists Read a Gene with DNA Sequencing

By: Rene Fester Kratz and
Updated: 03-26-2016
From The Book: Biology Workbook For Dummies, 2nd Edition

After they know the order of nucleotides in both versions of a gene, they can identify which changes in the gene cause the disease.

When a ddNTP is added to a growing chain of DNA, DNA polymerase can’t add any more nucleotides so the growing chain stops at that point. DNA sequencing uses this chain interruption to determine the order of nucleotides in a strand of DNA.

Most DNA sequencing done today is cycle sequencing (shown in the figure), a process that works like PCR to create many copies of the gene to be sequenced. But, unlike PCR, ddNTPs as well as regular nucleotides are added to the mix. So, as the DNA polymerase works away making many copies of the gene, every now and then it grabs a ddNTP (shown as white rectangles) instead of a regular nucleotide (shown as black rectangles). 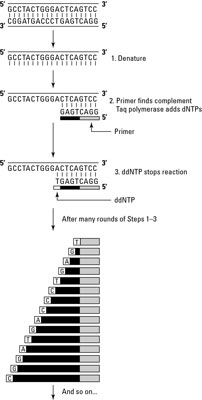 After a ddNTP is added to a growing DNA molecule, replication is stopped. The end result of cycle sequencing is lots of partial copies of the gene to be sequenced, all of which are stopped at different points and are therefore different lengths.

After the partial copies are made, scientists load them into a machine that uses gel electrophoresis to put the copies into order by size. As the partial sequences pass through the machine, a laser reads a fluorescent tag on each ddNTP, which reveals the order of nucleotides in the gene.

Test your ddNTP reading comprehension with these practice questions: