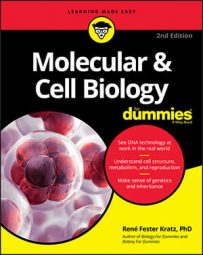 Explore Book Buy On Amazon
DNA is so small that you can barely see it with an electron microscope — and yet, people have figured out how to read it, copy it, cut it into pieces, sort it, and put it back together in new combinations. When DNA from two different sources is combined together, the patchwork DNA molecule is called recombinant DNA. For example, scientists have combined human genes and DNA from E. coli and then placed the recombinant DNA into E. coli so that the bacterium makes human proteins. Doctors can use these proteins, such as insulin, to treat human diseases. The tools that let scientists manipulate DNA in these amazing ways are called recombinant DNA technology.

Each restriction enzyme recognizes and cuts DNA at a specific sequence called a restriction site.

Restriction enzymes make cutting and combining pieces of DNA easy. For example, if you wanted to put a human gene into a bacterial plasmid, you’d follow these steps:

Any plasmids that contain human DNA are recombinant. These plasmids could now be inserted into bacterial cells.

cDNA is made from eukaryotic mRNA that has already been spliced to remove the introns.

The following figure shows the steps for making cDNA: 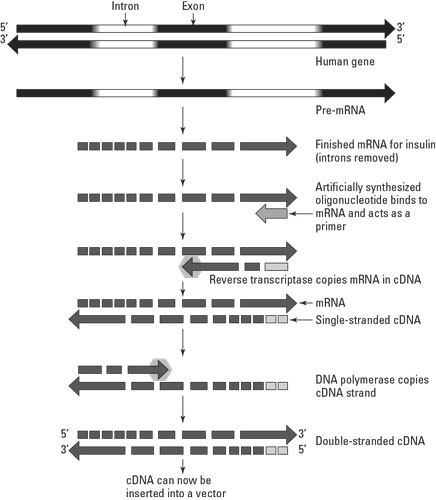 Cloning genes into a library

Scientists store the DNA they’re working with in DNA libraries, recombinant DNA molecules that contain the gene of interest. Once a gene is put into a DNA library, DNA cloning makes many identical copies of the gene. To clone a gene into a library, you first need to put the gene into a vector.

A vector, such as a plasmid or virus, helps carry DNA into a cell.

The following figure illustrates the process for introducing a gene into a vector and then cloning the gene into a library. 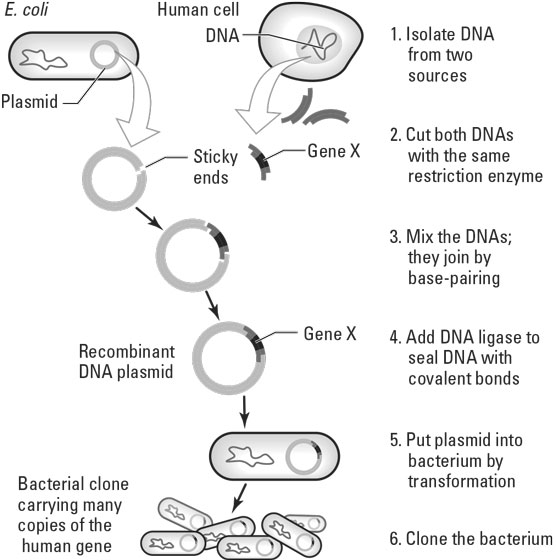 DNA libraries are recombinant vectors that store genes and keep them handy for scientists.

DNA libraries make it easier for scientists to work with DNA they’re interested in, such as DNA from a particular type of cell or organism. Scientists use several types of DNA libraries:

Finding a gene with DNA probes

After genes are cloned into a library, scientists use DNA probes to find the vectors that contain specific genes of interest. Probes are pieces of single-stranded DNA that are used to locate a particular DNA sequence (see the following figure).

Probes are also labeled with a fluorescent or radioactive marker so that you can locate them in a DNA sample. To use a probe to locate DNA, complete the following steps: