What are Transgenic Organisms?

By: Tara Rodden Robinson and Lisa Spock and
Updated: 01-30-2020
From The Book: Genetics For Dummies 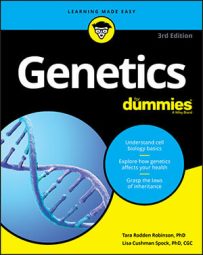 Explore Book Buy On Amazon
If genetic modification is so ubiquitous, what’s the problem with transgenic organisms? After all, humans have been at this whole genetic modification thing for centuries, right? Well, historically, humans have modified organisms by controlling matings between animals and plants with preexisting genetic compatibility, not by introducing sequences from different species.

Transgenics are often endowed with genes from very different species. (The bacterial gene that’s been popped into corn to make it resistant to attack by plant-eating insects is a good example.) Therefore, transgenic organisms wind up with genes that never could have moved from one organism to another without considerable help.

After these “foreign” genes get into an organism, they don’t necessarily stay put. One of the biggest issues with transgenic plants, for example, is uncontrolled gene transfer to other, unintended species. Another controversial aspect of transgenic organisms has to do with gene expression; many people worry that transgenes will be expressed in agricultural products in unwanted or unexpected ways, making food harmful to eat.

To understand the promises and pitfalls of transgenics, you first need to know how transgenes are transferred and why. Recombinant DNA technology is the set of methods used for all transgenic applications. This set of techniques also falls under the classification of genetic engineering. Genetic engineering refers to the directed manipulation of genes to alter phenotype in a particular way. Thus, genetic engineering is also used in gene therapy to bring in healthy genes to counteract the effects of mutations.

While different vectors, different source DNA, and different cell populations can be used, this basic process that underlies the creation of transgenes is essentially the same in the different types of organisms – animals, insects, bacteria, or plants.

In general, developing transgenic organisms involves three major steps: The process of finding and mapping genes is pretty similar from one organism to another and has been made much easier now that so many different organisms have had their genomes sequenced. After scientists identify the gene they want to transfer, they many need to alter the gene so that it works properly outside the original organism.

Recombinant DNA technology involves taking DNA from two different sources, cutting it, and then putting the pieces back together in different combinations. This process has been used for decades in order to clone genes or other segments of DNA. When we say “clone genes,” we mean to isolate the gene (various methods exist for doing this), insert it into a vector (such as a bacterial plasmid — a circular piece of DNA from a bacterium), and replicate in appropriate host cells, in order to create exact copies of the gene.

In order to clone a gene, the DNA first needs to be cut. To do this, scientists use restriction enzymes. Restriction enzymes are naturally made by bacteria, which use these proteins as a defense for viral infection. More than 3000 restriction enzymes have been characterized, with each one cutting DNA at a very specific sequence. For example, a common restriction enzyme known as EcoRI (which is made by the bacterium E. coli) cuts specifically at the sequence 5'-GAATTC-3'. EcoRI is also known to cut DNA so that sticky ends results — that is, it leaves short single-stranded DNA sequences at the ends of the cut fragments. The following figure shows how a restriction enzyme can cut DNA to leave sticky ends. 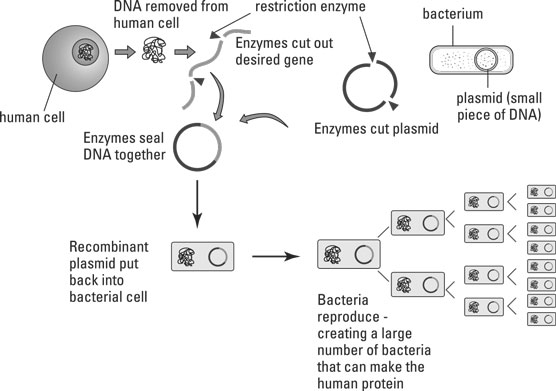 The plasmid can then be introduced into bacterial cells, which are grown in culture. In every new bacterial cell, there will be a copy of the plasmid vector containing the gene of interest. The gene is considered cloned after it is placed in the vector and the vector has been reproduced.

Modify the gene to reside in its new home

All genes must have promoter sequences, the genetic landmarks that identify the start of a gene, to allow transcription to occur. When it comes to creating a transgenic organism, the promoter sequence in the original organism may not be very useful in the new host; as a result, a new promoter sequence is needed to make sure the gene gets turned on when and where it’s wanted.

Using the same recombinant DNA techniques used in cloning a gene, an appropriate promoter can be inserted upstream of the gene to introduced, such that the gene would now be under the control of the designated promoter. Some promoters that are used are set to keep the gene on continually in all the cells of the organism. Other promoters are used because they only turn on (express the gene) in certain cell types or at a certain point in development. When more precise regulation is needed, genetic engineers can use promoters that respond to conditions in the environment.

In addition to the promoter, genetic engineers must also find a good companion gene — called a marker gene — to accompany the transgene. The marker gene provides a strong and reliable signal indicating that the whole unit (marker and transgene) is in place and working.

Common markers include genes that convey resistance to antibiotics. With these kinds of markers, geneticists grow transgenic cells in a medium that contains the antibiotic. Only those that have resistance (conveyed by the marker gene) survive, providing a quick and easy way to tell which cells have the transgene (alive) and which don’t (dead). Other markers or reported genes that can be used are those that allow for visualization of transgene expression, such as the gene for green fluorescent protein.