Explore Book Buy On Amazon
In life, things aren’t always black or white, and this is definitely true for some genetic traits. Mendel’s pea plants were tall or short with nothing in between, but scientists know this isn’t true for human height. And what about eye color? That’s not just blue or brown, it’s lots of shades of blue and brown plus green and hazel. And skin tones in humans range from deep chocolate brown to pale alabaster white.

Traits like these that display a wide range of variation result from the interaction of several genes, and are called polygenic traits (poly means “many,” and genic means “genes”).

In order to understand why polygenic traits lead to such a range of variations, try imagining each gene as a light with two light bulbs. Each light bulb is controlled by its own switch. If you flip one switch, one light bulb turns on and you get some light. If you flip the second switch, the second bulb turns on and you get more light. You can already see that you have three possibilities for light depending on how you flip the switches: no light, dim light, or bright light.

Polygenic inheritance works very much like this light switch example. Several genes contribute to the appearance of the trait, just like several lights determined how much light was in the room. Each gene has two alleles, just like each light had two switches. Just like more lights in the room gave more possibilities for the amount of light, more genes controlling a trait gives more possibilities for what you would see in people.

To make this a bit simpler, let’s just look at skin color. This image represents skin color as controlled by three genes. Two parents are shown that are heterozygous for each of the three genes. Along the edges of the giant Punnett square, you can see the various combinations of alleles the parents could give to their sperm and eggs. And then, inside the square itself, you see all the possible combinations that could be present in their children.

With just three genes involved, this couple could produce a child with one of seven different skin tones. Now if you imagine all the couples in the world who have children, and realize that each couple starts out with their own combination of alleles, you might begin to see why humans have so many different skin tones. The same is true for eye color, hair color, height, and many other human traits. 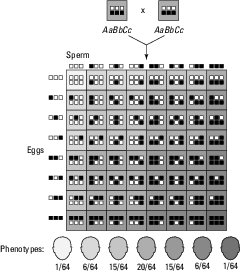