Stargazing at the Moon

The Moon is the Earth’s nearest neighbour in space, and it can be the brightest thing in the night sky. It’s also one of the most amazing sights seen through even a small telescope. If you look at only one thing through a telescope, it should be the Moon. But you need to observe it in just the right conditions. The Moon at its brightest (during a full Moon) can actually be a hindrance to astronomy, because it drowns out the light of the fainter stars; it’s like natural light pollution.

Stargazing: Phases of the Moon

The Moon goes through its cycle of phases once every 29.5 days. During a new Moon, when the Moon lies in the same direction as the Sun when seen from Earth, the Moon isn’t visible in the skies at all. A few days after the new Moon, the Moon will start to appear as a thin crescent before growing to a half Moon and then a full Moon. The Moon then appears to shrink again on its way back to the new Moon.

The Moon’s phases are:

The figure shows what the Moon looks like during each phase. 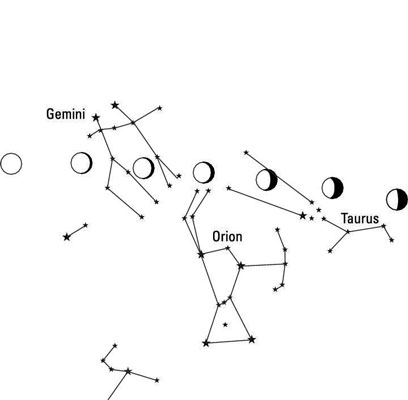 If you want to begin observing the Moon with a telescope or binoculars, you may want to buy a Moon map to guide you on your way. Some of the obvious features you’ll see on the Moon’s surface when you look at it through binoculars or a telescope are shown in the next figure, and include the following: 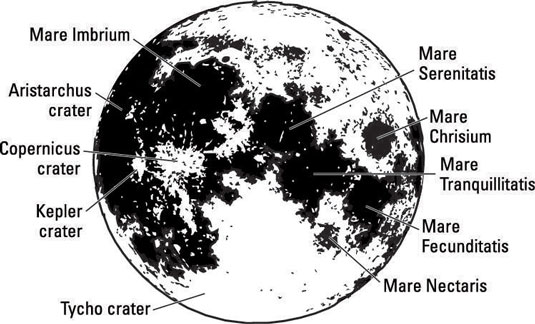 Stargazing: Half the Moon is always lit!

The Moon is a sphere of rock, and as the Sun shines light out into the solar system, half of the Moon’s surface is always lit. It doesn’t matter that you can’t always see the entire lit half; the Moon is always half lit by the Sun.