Keep an Eye on the North Star

Explore Book Buy On Amazon
Anyone can walk outside on a clear night and see some stars. But how do you know what you're seeing? How can you find it again? What do you watch for?

One of the most time-honored ways of getting familiar with the night sky if you live in the Northern Hemisphere is to pay attention to the North Star, or Polaris, which barely moves. After you identify which way is north, you can orient yourself to the rest of the northern sky — or to anywhere else, for that matter. In the southern sky, you need to find the bright stars Alpha and Beta Centauri (a Southern Hemisphere planisphere, smartphone app, or simple star map can help), which point the way to the Southern Cross.

You can easily find the North Star by using the Big Dipper in the constellation Ursa Major. The Big Dipper is one of the most easily recognized sky patterns. If you live in the continental United States, Canada, or the United Kingdom, you can see it every night of the year. 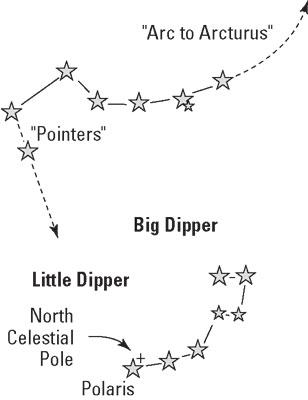 The Big Dipper points to other sights in the sky.

The two brightest stars in the Big Dipper, Dubhe and Merak, form one end of its bowl and point directly to the North Star. The Big Dipper helps you locate the bright star Arcturus, in Bootes, too: Just imagine a smooth continuation of the curve of the Dipper's handle.

Orion is a distinctive constellation visible in the Northern Hemisphere's winter evening sky, with the three stars that make up its belt pointing in one direction to Sirius in Canis Major and in the opposite direction to Aldebaran in Taurus. Orion also contains the 1st magnitude stars Betelgeuse and Rigel, two brilliant beacons in the sky. 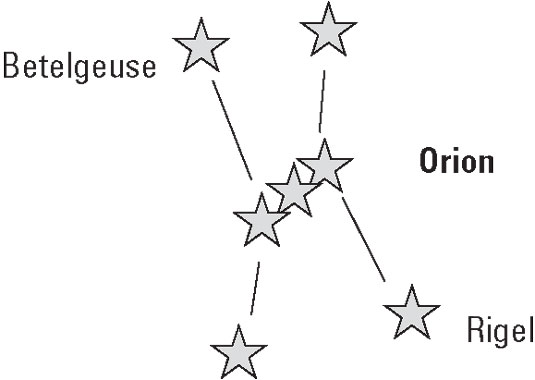 Orion and its bright, beaconlike stars Rigel and Betelgeuse.

You can become friends with the night sky by looking at this book's constellation maps and checking them out with your own eyes. Just as becoming familiar with the streets of your city helps you find your way faster, knowing the constellations helps you set your sights on the sky objects you want to observe. Gaining sky knowledge also assists you in tracking the appearance of the stars and their movements as you maneuver through a nightly session.