Inflation: A Swell Time in the Universe

Explore Book Buy On Amazon
Aside from ignoring the source of the expansion-causing explosion, the Big Bang theory has other shortcomings. In particular, it doesn't explain why regions of the universe that are separated by distances so vast that they can't communicate — even by a messenger traveling at the speed of light — look so similar to each other.

This period of enormous expansion spread tiny regions — which had once been in close contact — to the far corners of the universe. As a result, the cosmos looks the same on the large scale, no matter what direction you point a telescope. (Think of a big, lumpy ball of dough: If you roll the dough over and over again with your rolling pin, eventually you smooth out all the lumps and create a uniform sheet of dough.) Indeed, inflation expanded tiny regions of space into volumes far bigger than astronomers can ever observe. This expansion suggests the intriguing possibility that inflation created universes far beyond the scope of our own. Instead of a single universe, a collection of universes, or a multiverse, may exist. One universe is hard enough to comprehend as it is!

Inflation had another effect: The infinitesimally short but extraordinarily great growth spurt after the Big Bang captured random, subatomic fluctuations in energy and blew them up to macroscopic proportions. By preserving and amplifying these so-called quantum fluctuations, inflation produced regions of the universe with slight variations in density from one to another.

Because of inflation and the quantum fluctuations, some regions of the universe contain more matter and energy, on average, than other regions. As a result, there are cold spots and hot spots in the temperature of the cosmic microwave background. Over time, gravity molded these variations into the spidery networks of galaxy clusters and giant voids that fill our universe today. 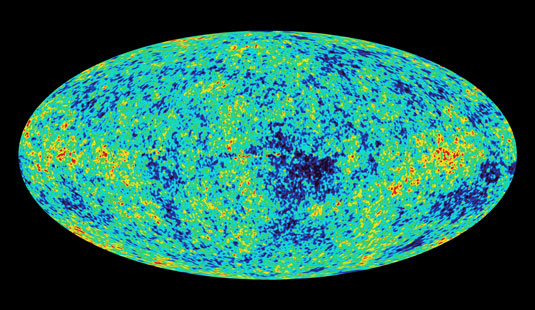 A "baby picture" of the universe, from the Wilkinson Microwave Anisotropy Probe satellite.