Wigging Out About Hair

Like most mammals, hair covers the entire human body except for the lips, eyelids, palms of the hands, soles of the feet, nipples, and portions of external reproductive organs. But human body hair generally is sparser and much lighter in color than that sported by most other mammals. Animals have hair for protection and temperature control. For humans, however, body hair is largely a secondary sex characteristic.

A thick head of hair protects the scalp from exposure to the sun’s harmful rays and limits heat loss. Eyelashes block sunlight and deflect debris from the eyes. Hair in the nose and ears prevents airborne particles and insects from entering. Touch receptors connected to hair follicles respond to the lightest brush.

The average adult has about 5 million hairs, with about 100,000 of those growing from the scalp. Normal hair loss from an adult scalp is about 70 to 100 hairs each day, although baldness can result from genetic factors, hormonal imbalances, scalp injuries, disease, dietary deficiencies, radiation, or chemotherapy.

Each hair grows at an angle from a follicle embedded in the epidermis and extending into the dermis; scalp hairs sometimes reach as far as the hypodermis. Nerves reach the hair at the follicle’s expanded base, called the bulb, where a nipple-shaped papilla of connective tissue and capillaries provide nutrients to the growing hair. 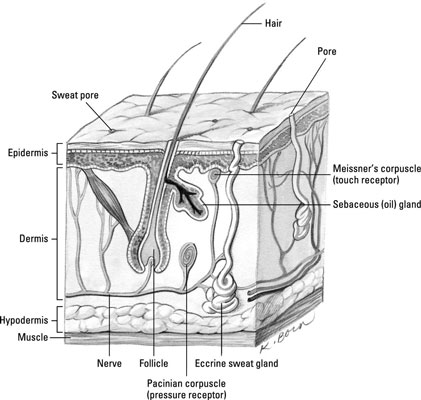 Epithelial cells in the bulb divide to produce the hair’s shaft (the part that extends out of the follicle). (The part of the hair within the follicle is called the root.) The shape of a hair’s cross section can vary from round to oval or even flat; oval hairs grow out appearing wavy or curly, flat hairs appear kinky, and round hairs grow out straight.

Each scalp hair grows for two to three years at a rate of about 1/3 to 1/2 millimeter per day, or 10 to 18 centimeters per year. When mature, the hair rests for three or four months before slowly losing its attachment. Eventually, it falls out and is replaced by a new hair.

Hair pigment (which is melanin, just as in the skin) is produced by melanocytes in the follicle and transferred to the hair’s cortex and medulla cells. Three types of melanin — black, brown, and yellow — combine in different quantities for each individual to produce different hair colors ranging from light blonde to black. Gray and white hairs grow in when melanin levels decrease and air pockets form where the pigment used to be.

Wondering why you have to shampoo so often? Hair becomes oily over time thanks to sebum, a mixture of cholesterol, fats, and other substances secreted from a sebaceous (or holocrine) gland found next to each follicle. Sebum keeps both hair and skin soft, pliable, and waterproof.

Attached to each follicle is a smooth muscle called an arrector pili (literally “raised hair”) that both applies pressure to the sebaceous gland and straightens the hair shaft, elevating the skin in a pattern called goose bumps or goose pimples.

Each hair is made up of three concentric layers of keratinized cells: