Muscles — Contracting for a Contraction

Although there are three distinct types of muscle tissue, every muscle in the human body shares one important characteristic: contractility, the ability to shorten, or contract. Before you can understand how and why muscles do what they do, it’s important that you understand the anatomy of how they’re put together. Use the figure as a visual guide as you read through the following information. 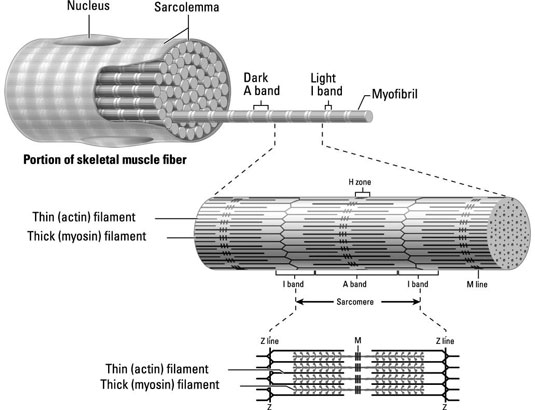 Breaking down a muscle’s anatomy and movement

This description of muscle is based on the most studied classification of muscle: skeletal. Each fiber packed inside the sarcolemma contains hundreds, or even thousands, of myofibril strands made up of alternating filaments of the proteins actin and myosin.

At the center of the A band is a less-dense region called the H zone. The H zone contains the M line, a fine filamentous structure that holds the thick myosin filaments in parallel arrangement.

Now, this is where the actin and myosin come in. Each sarcomere contains thick filaments of myosin in the A band and thin filaments of actin primarily in the I band but extending a short distance between the myosin filaments into the A band.

In a noncontracting fiber, actin filaments do not extend into the central area of the A band. This explains why the H zone is less dense. Those thin actin filaments are anchored to the Z line at their midpoints, which holds them in place and creates a structure against which the filaments exert their pull during contraction.

The myosin of the thick filaments has globular structures that interact with special active sites on the actin filament to form a bond called a crossbridge. The globular heads of the myosin are active in moving the actin filaments. The myosin contains ATP sites and active enzymes to split the ATP and release energy for the reaction.

The actin filament contains the protein tropomysin that plays a critical role in regulating the filament’s function. It prevents and regulates interaction of actin and myosin.

So how can the sarcomeres contract? Troponin, a second protein, binds with calcium ions and moves the tropomysin away from the binding site on the actin filament, effectively unblocking it. As the filaments slide past each other, the H zone is reduced or obliterated, pulling the Z lines closer together and reducing the I bands. (The A bands don’t change.) Voilà! Contraction has occurred!

After you know how muscles contract, you need to figure out what stimulates them to do so. Here you can find out what’s happening as an impulse stimulates a skeletal muscle.

The impulse, or stimulus, from the central nervous system is brought to the muscle through a nerve called the motor, or efferent, nerve. On entering the muscle, the motor nerve fibers separate to distribute themselves among the thousands of muscle fibers.

Because the muscle has more fibers than the motor nerve, individual nerve fibers branch repeatedly so that a single nerve fiber innervates from 5 to as many as 200 muscle fibers. These small terminal branches penetrate the sarcolemma and form a special structure known as the motor end plate, or synapse. This neuromuscular unit consisting of one motor neuron and all the muscle fibers that it innervates is called the motor unit.

Interference — either chemical or physical — with the nerve pathway can affect the action of the muscle or stop the action altogether, resulting in muscle paralysis. There also are afferent, or sensory, nerves that carry information about muscle condition to the brain.

When an impulse moves through the synapse and the motor unit, it must arrive virtually simultaneously at each of the individual sarcomeres to create an efficient contraction. Enter the transverse system, or T system, of tubules. The fiber’s membrane forms deep invaginations, or inward-folding sheaths, at the Z line of the myofibrils. The resulting inward-reaching tubules ensure that the sarcomeres are stimulated at nearly the same time.

Does it matter whether the signal received is strong or weak? Nope. That’s the all-or-none law of muscle contraction. The fiber either contracts completely or not at all. In other words, if a single muscle fiber is going to contract, it’s going to do so to its fullest extent.