US Constitution For Dummies Cheat Sheet 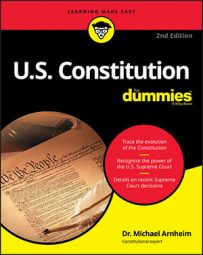 Explore Book Buy On Amazon
The US Constitution was written and signed by men who craved independence from Britain but who were nonetheless steeped in its history and ideals.

The document starts with some basic precepts of English governance, but then adds some uniquely American twists — three branches of government that act to check and balance each other, for example.

Although much thought went into the Constitution, the framers left it open to amendment. The first ten amendments were ratified just four years after the Constitution itself and are known as the Bill of Rights.

The Constitution and the establishment of government

The U.S. Constitution, as adopted by the Philadelphia Convention on September 17, 1787, sets out three distinct branches of national government and provides powers to each that serve as a check on the others. The following sections offer key facts about each branch.

The Executive Branch: The President

The highest elected official in the United States, the President

Congress has the power to make all federal laws, and only the House can introduce tax legislation. The Senate has the power to confirm or deny the President’s appointments to the Cabinet, the Supreme Court, and other key positions.

The Judicial Branch: The Supreme Court

The first ten amendments: The Bill of Rights

Some of the signers of the U.S. Constitution felt the need to spell out the rights of individual citizens in contrast to the establishment of the powers of the federal government enumerated in the Constitution itself. Thus, the first ten amendments to the Constitution, called the Bill of Rights, were ratified as a group by December 15, 1791. They are:

Who signed the US Constitution?

The 38 signers of the U.S. Constitution were delegates from the original states who gathered several times and in several places, first drafting the Declaration of Independence, and then, after the colonists defeated the British army and won independence, writing the U.S. Constitution. The signers of the two documents have some overlap — Benjamin Franklin signed both, but John Hancock wrote large only on the Declaration of Independence. The delegates are here grouped by the states they represented:

As a lawyer who consults with various U.S. firms on constitutional issues and as author of a text on British constitutional law, Dr. Michael Arnheim is uniquely qualified to present an unbiased view of the U.S. Constitution, what it says, what it means, and how it's been interpreted in a variety of situations.