Come on in and learn how to make the perfect hamburger, julienne vegetables, frost a cake, and a delicious array of other skills sure to impress whomever you might be cooking for. 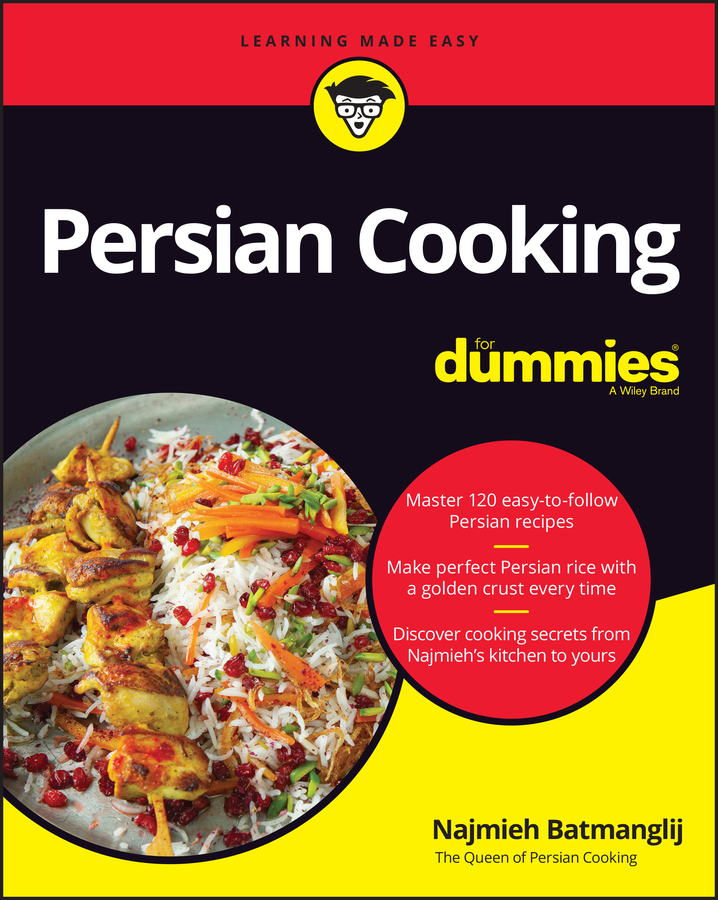 Taste Real Home-cooked Persian Food for Breakfast, Lunch, and Dinner The most celebrated Persian chef in America, Najmieh Batmanglij brings you her favorite traditional, healthy Persian dishes, simplified for modern American kitchens. Persian Cooking For Dummies, written for cooks of all skill levels will transform the way you cook. Offering more than 100 recipes, some of which can be made in less than an hour, this book will guide you through the art and craft of one of the world’s oldest, yet least known culinary, traditions in the West. These flavors and aromas are rarely replicated in restaurants, so prepare to be wowed by your own creations as you follow these easy guidelines in the warmth and comfort of your own kitchen. The distinctive herbs, the heavenly aromas of saffron and rose water, and the sweet and sour flavors will impress your guests and delight your family. Prepare kababs, braises, golden-crusted, tah-dig rice dishes, and delicious desserts Learn the tricks and techniques that have been perfected over thousands of years Enjoy the unique aromas and flavors of the food of Iran—right in your own home Learn the history of Persian cooking and access a glossary of Persian culinary terms Many recipes are one page, simple to follow, and take less than an hour to make.Adapted for today’s lifestyle, Persian Cooking For Dummies is perfect for experienced and novice cooks alike. Take a journey through this exotic cuisine and get cooking, with Dummies. 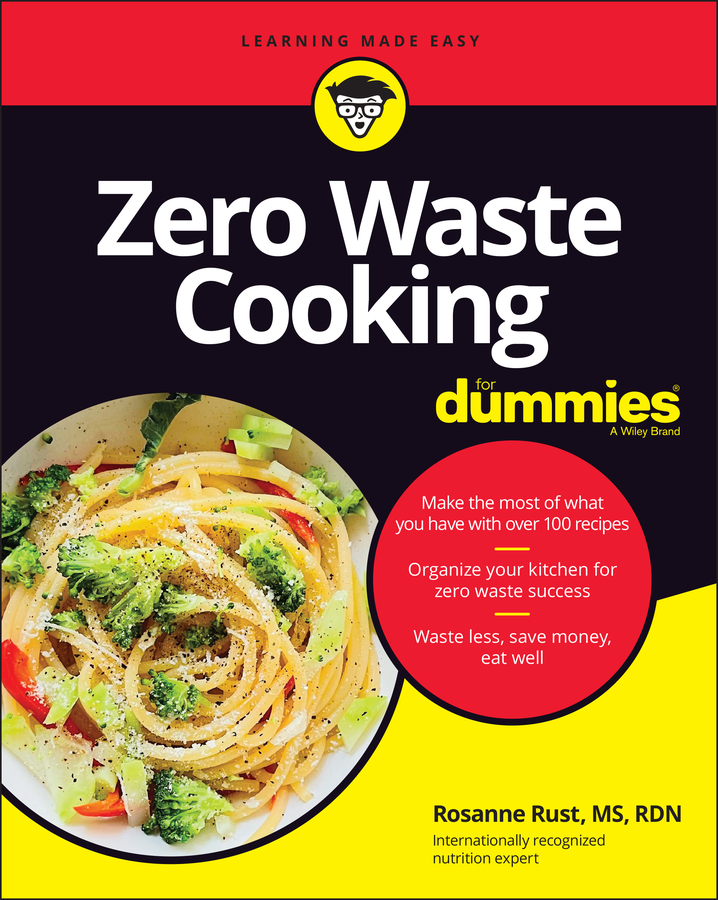 Your recipe for saving the planet (and some money too!) If you’re like many of us, you waste your fair share of food. And you may think that food waste is an inevitable part of modern life. But in Zero Waste Cooking For Dummies, you’ll learn a little about sustainability in agriculture and where your food comes from, and how to organize your kitchen for less waste. With food waste in mind, you’ll also learn how to meal plan and shop within your budget.And ultimately, you’ll learn how to use every last bit of what’s in your fridge, freezer, and cupboard to make delicious meals, save money, and do your part for the environment. In this book, celebrated dietitian and internationally recognized author Rosanne Rust walks you through every step of transforming how you plan your meals, shop for groceries, store your food, cook your food, and deal with leftovers. Whether you’re more experiences or the type of cook who can burn water, you’ll find tips and strategies that help you buy, use, and waste less food. Zero Waste Cooking For Dummies offers: Dozens of recipes for delicious entrees, appetizers, breakfasts, soups, salads, and more Meal planning ideas that make grocery shopping a breeze, save you real money, and help you make the most of what you have in your kitchen Tips and tricks for how to use leftovers, how to craft new dishes with leftover ingredients so you don’t need to throw anything away, and more This book is a must-read for any homemaker, home cook or anyone looking for ways to save a little money, reduce their carbon footprint, and make some awesome, nutritious meals.

Get started cooking now with Cooking Basics For Dummies, 5th Edition! Are you looking to dig yourself out of microwave dinners and learn the ropes of home cooking? Cooking Basics For Dummies, 5th Edition takes the intimidation out of cooking and helps you start cultivating your culinary prowess in no time. From learning fundamental cooking techniques like dicing, chopping, and saut?ing to creating delicious, easy-to-follow recipes, you'll discover how to cook up crowd-pleasing meals the whole family will enjoy—all without breaking a sweat! Even if you've never cracked an egg, this friendly, practical guide gives you all the ingredients to become a superior home cook. In plain English, it explains step-by-step how to master popular cooking techniques, such as dicing vegetables, hard boiling an egg, making quick and delicious sauces, planning menus, stocking your pantry, and so much more. Packed with more than 150 easy-to-follow recipes for every meal of the day, from mouth-watering mains to sumptuous sides to delectable desserts Helps you master grilling, slow cooking, baking, roasting, pressure cooking, and more Includes tips on adapting meals to meet the latest dietary trends, such as low-sugar, low-sodium, low-fat, plant-based, and vegetarian diets Covers shopping at farmer's markets and buying organic foods Cooking Basics For Dummies, 5th edition is for every beginner cook or polished chef looking for a refresher on breathing new life into home-cooked meals. P.S. If you think this book seems familiar, you’re probably right. The Dummies team updated the cover and design to give the book a fresh feel, but the content is the same as the previous release of Cooking Basics For Dummies (9781118922316). The book you see here shouldn’t be considered a new or updated product. But if you’re in the mood to learn something new, check out some of our other books. We’re always writing about new topics!

Butchery and Sausage-Making For Dummies

Discover how to butcher your own meat and make homemade sausage With interest in a back-to-basics approach to food on the rise, more and more people are becoming interested in butchering their own meat and making high-quality, preservative-free sausages. With easy-to-follow instructions and illustrations, Butchery & Sausage-Making For Dummies offers readers a look at how to butcher poultry, rabbit, beef, pork, lamb, and goats. The book will also explore sausage-making, with tips and recipes, and will look at preserving meat through curing and smoking. Offers natural, healthier alternatives for sausages and preserved meats for people wary of processed foods Provides helpful tips and guidance for home cooks and beginner butchers Provides needed guidance for those looking to explore this long-overlooked profession Butchery & Sausage Making For Dummies is an invaluable resource for home cooks interested in being more responsible about their meat, or those that are looking to save money and enjoy healthier alternatives to what's found in their local grocery store.

The fast and easy way to find your place in the culinary field Ever dream of exploring an exciting career in culinary arts or cooking but don't know where to begin? Culinary Careers For Dummies is the perfect book for anyone who dreams of getting into the culinary profession. Whether you're a student, an up-and-coming chef looking for direction, or are simply interested in reinventing yourself and trying your hand at a new career, Culinary Careers For Dummies provides the essential information every culinary novice needs to enter and excel in the food service industry. Packed with advice on selecting a culinary school and tips for using your degree to land your dream job, Culinary Careers For Dummies offers up-to-the-minute information on: culinary training, degrees, and certificates; the numerous career options available (chef, chef's assistant, pastry chef, food stylist, caterer, line cook, restaurant publicist/general manager, Sommelier, menu creator, food writer, consultant/investor, etc.) and the paths to get there; basic culinary concepts and methods; advice on finding a niche in the culinary world; culinary core competencies; food safety and proper food handling; real-life descriptions of what to expect on the job; and how to land a great culinary job. Expert guidance on cooking up your career plan to enter the food service industry Tips and advice on what to study to get you where you're headed Packed with information on the many career options in the culinary field Culinary Careers For Dummies is a one-stop reference for anyone who is interested in finding a career in this growing and lucrative field.

Cooking Around the World All-in-One For Dummies

Ever have food fantasies in a truly international vein—an appetizer of feta cheese and roasted pepper spread, an entrée of spinach ravioli and steaming coq au vin, with a side of bulghur wheat and parsley salad, topped, finally, with a dish of cool gelato di crema (vanilla ice cream) and chocolate souffle for dessert. Well, fulfilling food fantasies that read like the menu in the UN cafeteria is now entirely possible. With Cooking All Around the World All-in-One For Dummies, you’ll be introduced to the cooking styles and recipes from eight of the world’s most respected cuisines, experiencing, in the comfort of your own kitchen, the fabulous variety of foods, flavors, and cultures that have made the world go round for centuries. With a roster of cooking pros and all-star chefs, including Mary Sue Milliken, Susan Feniger and Martin Yan, Cooking All Around the World All-in-One For Dummies includes some of the most popular recipes from Mexican, Italian, French, Greek and Middle Eastern, Indian, Chinese, Japanese, and Thai cuisines, revealing the cooking secrets that have made these recipes so winning and, in some cases, such a snap. Inside, you’ll find: The essential ingredients and tools of the trade common to each cuisine The basic cooking techniques specific to each cuisine How to think like an Italian or Chinese chef What the inside of a French, Greek and Middle Eastern, and Japanese kitchen really looks like And once you become familiar with the new world of spices and ingredients, you’ll be whipping up tasty, new exotic dishes in no time! Page after page will bring you quickly up to speed on how to make each part of the menu—from appetizers, entrées, to desserts—a sparkling success: Starters, snacks, and sides—including Gazpacho, Tuscan Bread Salad, Leeks in Vinaigrette, Falafel, Spring Rolls, Miso Soup, Chicken Satays with Peanut Sauce The main event—including Chipotle Glazed Chicken, Lasagna, Cauliflower au Gratin, Lamb Kebabs, Grilled Tandoori Chicken, Braised Fish Hunan Style, Shrimp and Veggie Tempura Sweet endings—including Mexican Bread Pudding, Biscotti, Chocolate Souffle, Yogurt Cake, Mango Ice Cream, Green Tea Ice Cream, Coconut Custard with Glazed Bananas With over 300 delicious recipes, a summary cheat sheet of need-to-know info, black-and-white how-to illustrations, and humorous cartoons, this down-to-earth guide will having you whipping up dishes from every part of the globe. Whether it’s using a wok or tandoori oven, with Cooking All Around the World All-in-One For Dummies every meal promises to be an adventure, spoken in the international language of good food.

Discover how easy and fun baking can be!Ever walk past a bakery window and marvel at the assortment of cookies, tarts, pies, and cakes and wonder how they did it? Wonder no more. The secrets to creating them can now be yours. With Baking For Dummies, You'lll discover how simple (and fun!) whipping up any sort of baked good from a chocolate layer cake, a classic apple pie to a plateful of scrumptious chocolate chip cookies or black-and-white brownies actually is. The magic is in the doing and baking expert Emily Nolan shows you how. In almost no time, you'll get down to basics with easy-to-follow tips on: Outfitting your kitchen with a baker's essentials iincluding baking pans (loaf pans, springform pans, glass vs. aluminum pie plates), food processors and blenders, bowls, measuring cups, graters, and sifters Measuring ingredients, preparing pans, working with eggs, zesting fruit, and melting chocolate Getting ready to bake,preparing your kitchen, working with recipes, and using the right equipment And once you're all set, you'll marvel at how simple creating the smallest baking masterpiece really is: From chocolate cupcakes topped with mocha frosting to a lemon-curd cheesecake, to fluffy blueberry muffins and buttermilk biscuits From scrumptious pumpkin and chocolate cream pies and a classic cheesecake to outrageously delicious chocolate chip and oatmeal raisin cookies From a heart-warming chicken potpie to a yummy cheese soufflé With over 100 recipes to choose from (including ones for soft pretzels and pizza!), eight pages of color photos, a summary cheat sheet of baking essentials, black-and-white how-to illustrations, and humorous cartoons along the way, the book will reward, even a baking novice, with delicious results and allow you to enjoy the unending magic of baking from scratch.