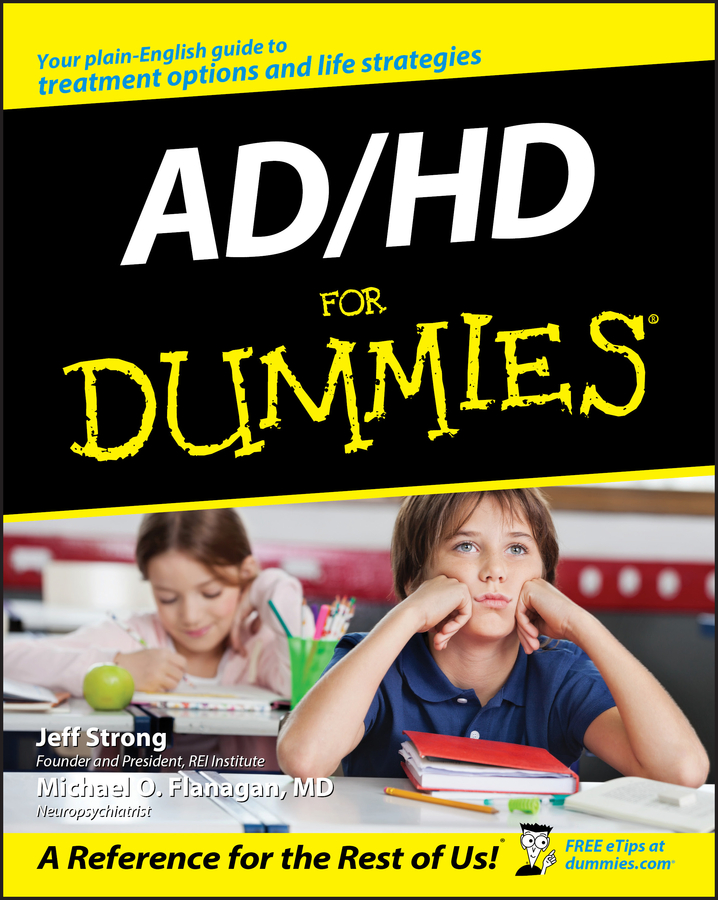 Sound advice for parents whose kids have trouble concentrating

According to the National Institutes of Health, an estimated five to ten percent of children suffer from Attention Deficit Disorder (ADD) or Attention Deficit Hyperactivity Disorder (ADHD). This book provides answers for parents of children who may have either condition, as well as for adult sufferers. Written in a friendly, easy-to-understand style, it helps people recognize and understand ADD and ADHD symptoms and offers an authoritative, balanced overview of both drug and non-drug therapies.

Sound advice for parents whose kids have trouble concentrating

for parents of children who may have either condition, as well as for adult sufferers. Written in a friendly, easy-to-understand style, it helps people recognize and understand ADD and ADHD symptoms and offers an authoritative, balanced overview of both drug and non-drug therapies.
AD/HD For Dummies Cheat Sheet

Understanding and diagnosing attention deficit/hyperactivity disorder, or AD/HD, begins with learning the three types of AD/HD and recognizing that they can be exhibited through secondary symptoms as well. To cope with AD/HD, explore a number of treatment options and how they can be approached for better results.

Picturing the Primary Symptoms of AD/HD

AD/HD has three primary symptoms: inattention/distractibility, impulsivity, and hyperactivity. These symptoms don't all have to be present in order for you to have AD/HD, and if you do have one or more of them, they may not be present all the time.

A key thing to know about this symptom is that it can look different in almost everyone, and it can change from day to day in each person. But even with such variability, a few basic characteristics of inattention and distractibility are found in people with AD/HD. These are:

Impulsivity is the inability to consider the consequences of your actions beforehand — in other words, doing before thinking. When you have this symptom of AD/HD, it's almost as though you have an involuntary response to a stimulus. The response can take the form of actions or words.

Like the other symptoms of AD/HD, impulsivity looks different depending on the person. Some people have difficulty considering what they say before saying it, whereas others may act at times without thinking. Here are a few ways that impulsivity can manifest in people with AD/HD:

Restlessness and hyperactivity are essentially the same thing — the inability to regulate your physical movements. For the person with this symptom of AD/HD, sitting still is difficult (especially at school or work where sitting for extended periods of time is expected), as is doing activities that require minimal physical movement, such as playing quiet games.

Keep in mind that most young children exhibit what would be called hyperactivity — frequent movement and activity. This isn't necessarily a sign that your child has AD/HD. Most children outgrow this level of activity by the time they're 4 or 5. And even before then, most kids have periods of time where they're able to sit quietly, such as when reading a book with a parent or older sibling.

Restlessness and hyperactivity are so variable in people that in one instance this symptom may be obvious, and in another it may be almost completely disguised. Following are a few of the ways this symptom can present itself:

Although the exact cause of AD/HD is still unknown, there is no shortage of research into the biology of AD/HD. This research fits into four broad categories: genetic, anatomical, functional, and chemical.

AD/HD runs in families — so much so that when diagnosing the condition, an AD/HD professional's first step may be to look at the person's family to see if anyone else has it. The precise genetic factor has yet to be confirmed, but recent research has identified a couple of genes that may contribute to AD/HD.

Many studies have examined AD/HD from a genetic perspective. These include studies that look at adoptive versus biological parents, the prevalence of AD/HD in families, twins' tendency to share AD/HD, and specific genes associated with AD/HD. Here's a short sampling of some of these areas of investigation:

Researchers have conducted a few studies into the size and shape of the brains of people with AD/HD compared to people without it. A lot of conflicting data exists in this area, but a couple basic ideas have been suggested:

While anatomical research continues, most of the AD/HD research being done right now focuses on differences in brain activity between the AD/HD and non-AD/HD populations.

• Frontal lobe: Dr. Amen found a decrease in activity in this area when people with AD/HD are asked to concentrate. This corresponds with research done by Drs. Lubar and Zemetkin.

• Parietal lobe: Located toward the back of the brain, this section is also referred to as the sensory cortex. Dr. Amen suggests that certain people with AD/HD have more activity in this area than other people.

One way to think about AD/HD is that it is a problem of balance between the activities of norepinephrine and dopamine two different neurotransmitters. When you have too much norepinephrine working, you are agitated, and you can pay attention only to things that may be threats or targets of opportunity (the "fight or flight" mechanism is very active). When you have more dopamine dominance, you tend to get stuck on repetitive activities, and you don't get bored doing the same things over and over. AD/HD is associated with having too much norepinephrine.

Improving Your Life When You Have AD/HD

One of the main characteristics of AD/HD for most people is extreme, frequent changes in mood. One minute you may feel happy and hopeful, and a minute later you feel angry and frustrated without anything outside of you causing the change. This phenomenon is a product of several different factors, the most important of which are:

Here are some suggestions to deal with negative thoughts that can lead to negative moods:

Extreme moodiness may be a sign of depression or bipolar disorder. Because both of these conditions are common among people with AD/HD, have a professional screen you for these conditions.

AD/HD is an explanation, not an excuse. You must take responsibility for your actions regardless of the fact that AD/HD has a biological cause. If your behavior is causing problems in your life, you need to seek the best possible help in getting it under control.

If you hurt someone, create a problem, or make situations more difficult — even unintentionally — don't use your diagnosis of AD/HD as an excuse. You and everyone else will benefit if you can focus on understanding how your actions caused the hurt or contributed to the problem. If you can find a way to express that understanding to the other people involved, all the better; they can then realize that you have not ignored their feelings and rights.

The most important thing you can do is to learn from situations in which your AD/HD plays a part in creating bad feelings or less-than-optimal outcomes. That way, you can take responsibility and continue on the road to self-improvement.

Child Psychology and Development For Dummies