Logic Pro Automation: Turning Your Mix into a Performance 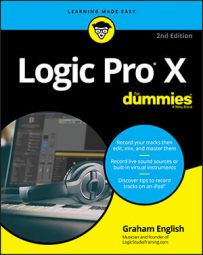 Explore Book Buy On Amazon
Every track, channel strip, and plug-in is capable of being automated in Logic Pro X. Automation is best to add after the mix is stable. If you’re still arranging or editing your project, having automation on a track can get in the way of your workflow because you have more things to focus on as you edit. And if your mix isn’t stable, the mixing you do affects the automation as well. For these reasons, it’s a good idea to use project and track notes to jot down any automation ideas you may want to try later.

After your mix is stable, take a pass through the project, focusing on each of the core mixing concepts. Automate the levels, panning, EQ changes, effects, and dynamics. If you plan your automation this way, the final result will be an elevated and interesting mix.

Track automation in the tracks area.

After you’ve enabled automation on a track, you can choose between the following four automation modes on the menu:

After you enable automation, adding it to your track is as simple as clicking a location on a Logic Pro region with the pointer tool. A control point is added with the current parameter’s value.

If you know that the parameter value you’re automating will return to its original value, you’ll save time by creating an automation point at the beginning and ending of regions. Choose Mix → Create Automation → Create 1 Automation Point at Region Borders.

The fastest way to adjust automation points is to select them with the pointer tool and drag them up, down, left, or right. You can select multiple points by Shift-clicking them. You can delete selected points by pressing Delete.

Moving regions with or without automation in Logic Pro X

You may end up needing to make an edit to a track or to your song arrangement after you’ve started automating your mix. Moving regions with automation can cause complications if you don’t do it right. That’s why Logic Pro’s default state is to ask you whether you really want to move regions that have automation. You can change this behavior in the automation system preferences. Choose Logic Pro X → Preferences → Automation to open the automation preferences, and then choose the default behavior from the Move Track Automation with Regions menu. You can choose the default behavior also on the Mix → Move Track Automation with Regions menu. 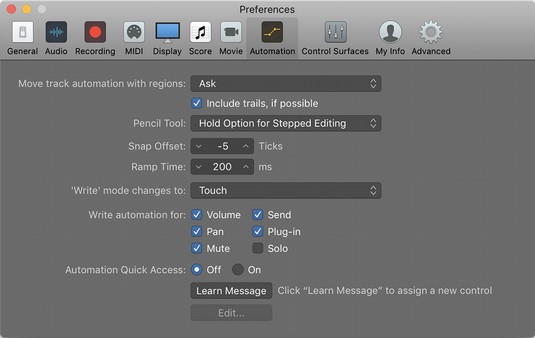 The most precise way to automate your mix is by inputting automation data in the tracks area. But when automation was created on hardware mixing consoles, the automation was performed in real time as the project was playing. Recording live automation is an enjoyable experience because you get to perform along with your track, and perhaps create some magic along the way. Here’s how to record live automation:

Automation is the tool you need to keep your mix dynamic. As song sections change and the intensity of the music changes, automation helps you adjust your mix to keep it balanced and interesting. When your mix automation is complete, you’re ready to master your track. It is sometimes hard to know exactly when your mix is complete, so keep this tip in mind: Think like a pro and set deadlines. There's no such thing as a perfect mix. Do your best, mix a lot, and you’ll continue to improve.

Graham English is a singer/songwriter, multi-instrumentalist, jazz-trained keyboard player, and audio expert. When he's not sharing the stage with rock and jazz greats, he trains and coaches creative professionals at Logic Studio Training and creates online training materials for aspiring songwriters at speedsongwriting.com.