How to Create Borders in Word 2013

To create borders around your text in Word 2013, you can use either the Borders command button from the ribbon or you can summon the Borders and Shadings dialogue box.

How to use the Borders command button

Word 2013 places its basic text decoration doodlings on the Borders command button menu. It’s found in the Home tab's Paragraph group. Clicking that button immediately applies the indicated border to your text, or removes the borders, as is the case with the No Border button. 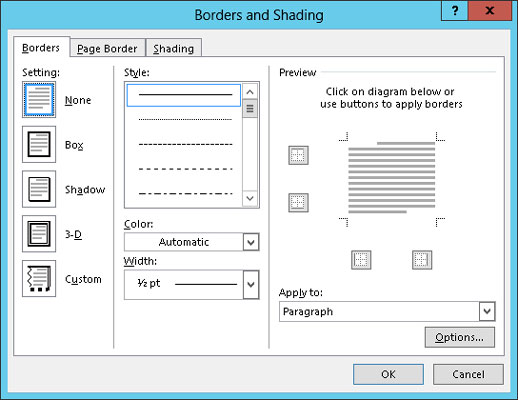 Unlike on the Border menu, several options are available in the Borders and Shading dialog box for setting borders. Most notably, you can set the border line style, thickness, and color.

You can also use the Borders and Shading dialog box to create a page border and apply background color (shading).

Click the OK button to apply your border settings and close the dialog box, or press Cancel, to give up and quit.