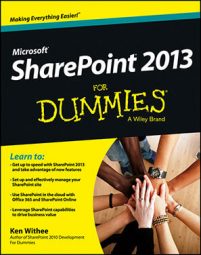 SharePoint apps based on libraries let you store and share files securely, and they also add features that help you manage things such as document workflow (the processes that let people edit, comment on, and approve documents) and version histories (what happened to a file, and who did what).

Although file shares give you one path through folders to your document, SharePoint library apps give you other paths to expose content. You can access documents directly through the browser, you can display them up in Web Parts, and you can sort and filter them with their metadata and content types. And with library apps, you can expose files by their title, not just their filename.

Library apps give you multiple choices about how the documents get into them, too. You can save a document to a Library app using a Microsoft Office client such as Word or Excel, or you can e-mail documents to Library apps or drag and drop from Windows Explorer. And you can create documents directly in the app.

No matter how you get your documents into SharePoint’s Library apps, just get them there — it’s so much easier to share documents with your coworkers in an app than it is to use file shares or e-mail attachments.

When you create the app, you give it a name and choose an app template. From that point on, you just call your app by its name. For example, you might create the Sales Pitch app. The app is designed to hold sales pitch documents. Because the app holds documents, it uses the Document Library app template.

If you’re a seasoned SharePoint user, this new app stuff might take you a while to get your head around. But when you realize that most users don’t think in terms of lists and libraries, and instead think about what a list or library does, it really is much easier to just call everything an app.

An app can also be built from scratch by a web developer as a standalone app, so such an app isn’t based on a list or a library.