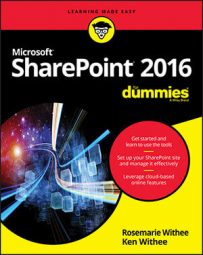 When you create an app you choose the type of template it should use. There are templates for things like libraries, lists, calendars, tasks, and discussion boards. When you add an app to your site you give it a name. For example, you might add a Calendar app and call it Company Holidays.

The apps that you have available depend on the SharePoint 2016 edition you are using as well as the features you have activated. For example, the Report Library app is only available with the Enterprise license.

The following are common apps that you should be aware of.

Rosemarie Withee is President of Portal Integrators LLC and Founder of Scrum Now with locations in Seattle, WA and Laguna, Philippines. She is also the lead author of Office 365 For Dummies.

Ken Withee writes TechNet and MSDN articles for Microsoft and is the author of SharePoint 2013 For Dummies.